"EXIT TAXES": How California Tries to Stop the Lower Middle Class From Fleeing for Texas


California exports more than commodities such as movies, new technologies and produce. As The Sacramento Bee reports, it also exports truck drivers, cooks and cashiers.

Every year from 2000 through 2015, more people left California than moved in from other states. This migration was not spread evenly across all income groups, a Sacramento Bee review of U.S. Census Bureau data found. The people leaving tend to be relatively poor, and many lack college degrees. Move higher up the income spectrum, and slightly more people are coming than going. About 2.5 million people living close to the official poverty line left California for other states from 2005 through 2015, while 1.7 million people at that income level moved in from other states – for a net loss of 800,000. During the same period, the state experienced a net gain of about 20,000 residents earning at least five times the poverty rate – or $100,000 for a family of three...

...“There was really nothing left for me in California,” said Kundurazieff, who also writes a blog about his cats. “The cost of living was high. The rent was high. The job market was debatable.”

Not surprisingly, the state’s exodus of poor people is notable in Los Angeles and San Francisco counties, which combined experienced a net loss of 250,000 such residents from 2005 through 2015.

The leading destination for those leaving California is Texas, with about 293,000 economically disadvantaged residents leaving and about 137,000 coming for a net loss of 156,000 from 2005 through 2015. Next up are states surrounding California; in order, Arizona, Nevada and Oregon. 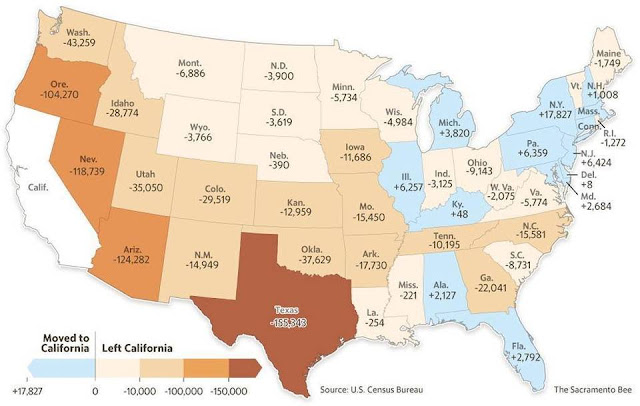 Losing impoverished residents to other states is better for the state’s economy than losing wealthy residents, some experts said. But they said the migration itself is a symptom of deeper social problems largely related to how expensive California has become.

“Why are people leaving? Economic reasons, the high cost of living, are certainly a part of it,” said Hans Johnson, senior fellow at the nonpartisan Public Policy Institute of California. “For those people (near the poverty line), California is not viable.”

By some measures, California has the highest poverty rate in the nation.

And as more and more residents leave, the burden to fund the state's welfare exuberance will fall more and more on the wealthier (that actually pay taxes). Rather than secession, perhaps it's time for the wealthy to join 'the poor' exodus and beat the crowd out of California...

George Bernard Shaw said, “A government that robs Peter to pay Paul can always depend on the support of Paul.” In many cases Peter quietly moved away and took his money with him.

Remember when top professional golfer, Phil Michelson created quite a stir complaining about California taxes, while putting his home up for sale? He would have been better off staying quiet about his reasons. California Political Review reports:

And as Dennis Miller previously noted, the election of President Trump sent shock waves through much of the political class. Many public union pensions are woefully underfunded. They donated millions to Hillary Clinton’s election campaign and expected federal bailouts. They knew they could count on Mrs. Clinton; she has a great track record of rewarding her political donors. Today no one knows what the new administration will do.

In the meantime, the scramble is on. The politicians in states that have been heavily supporting Paul have a huge base, not because they have won over the hearts and minds of Peter; but rather because the working class got tired of being fleeced and left. The politicos have to find ways to make good on all their free programs. Cutting benefits will cause citizens to storm the palace. They must find ways to generate more revenue.

“To be clear, it is not legal for states to charge a true exit tax on citizens changing their residency from one state to another (this is not the case for the federal government, which does charge a large exit tax).

So what do high-tax states do to try and prevent their residents from moving their legal residence to low- or no-tax states? In a word, they audit them.”

When a taxpayer is audited, the agency issues an assessment for unpaid taxes. It’s not “innocent until proven guilty.” You must prove they are wrong or the assessment stands.

Once you intend to leave you are of no value to the politicos. Most people do not have the means to go to court. For some, it becomes a government shakedown to extract as much wealth as they can on your way out the door.

If they're Democrats....don't come to Texas. You destroy California, stay there.

Yeah everyone knowspoor immigrants worked in the aviation industry. The truth is poor illegals are pouring into the welfare state while small businesses, mid sized businesses, and the middle class are fleeing.

And it can be demonstrated by the State's intake of taxes, its tax registry, and small business registry.

And the Muslims did to the Jews.