GET THIS: Dames Freak When a Man Identifying as a Woman "Wins" a Female Weightlifting Competition

As Ace notes, this type of thing is going to become more and more common. I’m waiting for the 3rd Wave Feminists to suddenly realize that people with dangley bits are suddenly beating biological women in sports competitions and that This Is Not Fair™:

A transgender weightlifter who transitioned from male to female caused outrage after he won a female competition Sunday. 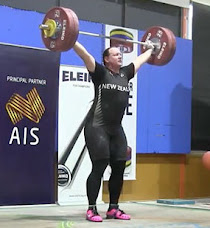 One weightlifter pointed out that Hubbard competing in the women’s division could be unfair.

“We all deserve to be on an even playing field,” Deborah Acason, from the Australian Weightlifting Federation, told 1News Now. “It’s difficult when you believe that you’re not. If it’s not even, why are we doing the sport?”

And some other women were rather upset. But, hey, this is the kind of thing all the 3rd Wavers have been protesting for, so, we go back to the old saying of being careful what you wish for…