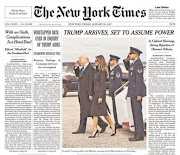 There is far, far more substance to what Trump is alleging than the entire thing that the Democrats and the media are alleging. There is no evidence that the Russians had anything to do with the outcome of our election, none, and there won’t be any, because the Russians didn’t.

But there’s all kinds of evidence, circumstantial and suspicious and common sense that this is what the Obama administration did. We’ve got countless examples of them wiretapping. We’ve got their “house organ” admitting that wiretap data was used in the inquiry of Trump aides. But one of the names on this story, one of the reporters is named Michael S. Schmidt. 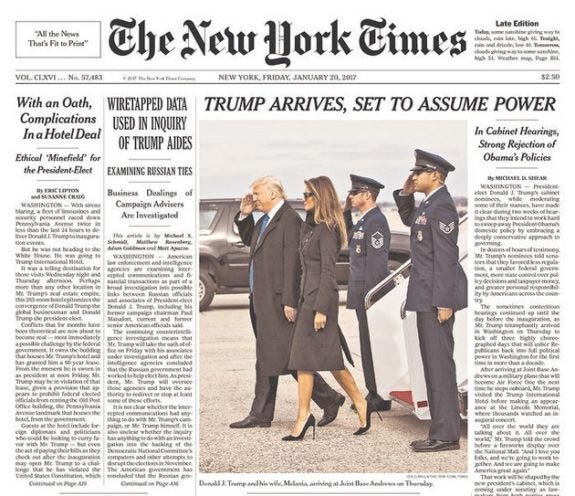 Now, folks, January 20th, New York Times, Michael Schmidt wrote that team Trump had Russia connections, and to support his point, said that Trump’s people were wiretapped, and that’s in the New York Times in January. So Trump tweets over the weekend that Obama’s wiretapping him, and how low that is and what Trump thinks of it and so forth. This same reporter comes back and says there’s no evidence of that. Trump’s a lunatic. There’s no evidence that. Trump’s insane.

Well, now how can this be? The New York Times has the word “wiretapped” in a headline. The writer, one of three on the piece, claims that Trump had Russian connections and to support the point, he said that Trump’s people were wiretapped. So Trump comes along, “Yeah, I was wiretapped.” Same reporter: “There’s no evidence of that.” Now, what’s going on at the New York Times? How in the world — do they know what they’re doing or did they just forget what they did? Are they so obsessed with hatred — and that’s what the Democrat Party and the left has become, folks.

These people at the New York Times write in January that Trump was wiretapped and that’s why we know he was working with the Russians. A month and a half later, Trump claims Obama wiretapped him, and the New York Times writer says, “There’s no evidence of that.” Well, was there no evidence when you wrote about it in January or did you forget what you wrote in January? Is it your raw hatred for Trump, your raw resentment at having lost, is that what’s causing you to lose every ounce of credibility, morality, authority, and credibility that you’ve got?

And it’s only going to get worse because it is obvious that there’s nothing factual or very little that’s factual that is backing up everything these people are using to try to destroy Trump. It’s nothing but pure, raw hatred, and it’s on display for everybody to see.

The NYT seems to have taken this story off its website.

Yay, Trump!!!
'I would defend him till death!!' - depressing what the filthy, whorizontal DEMOCRATS would say in the old days.

Now, just the same with a lot moe curley vitriol. Sad, too, how we'll all perish... yet, most of U.S. think absolutely NTHN of the Trinity.

Let this be your catalyst to Seventh-Heaven:

'The more you shall honor Me,
the more I shall bless you'
-the Infant Jesus of Prague
(<- Czech Republic, next to Russia)

Love him or leave him or indifferent...
better lissen to the Don:

If you deny o'er-the-Hillary's evil,
which most whorizontal demokrakkrs do,
you cannot deny Hellfire
which YOU send YOURSELF to.

Yes, earthling, I was an NDE:
the sights were beyond extreme.
Choose Jesus.
You'll be most happy you did.
God bless your indelible soul.