When I was in first grade, I was green with envy over a single toy owned by my next-door neighbor and best friend. His parents had bought him a Johnny Seven OMA. Decades later, I still remember the Johnny Seven and how my parents would never spring for one.

But I'm not bitter. 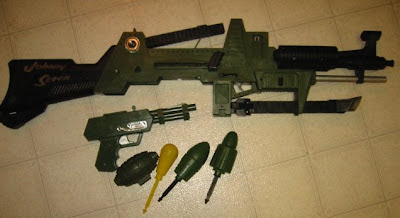 Honestly, though, if a kid was walking around with a Johnny Seven these days, they would call in a SWAT team and a hostage negotiator. And Chuck Schumer would hold a press conference to get more face time on TV.

Man, how times have changed.

Update: More Toys That Would Be Completely Illegal Today.

Linked by: American Digest and Six Meat Buffet. Thanks!

at 6:24 PM
Email ThisBlogThis!Share to TwitterShare to FacebookShare to Pinterest
Labels: Firearms, Water-cooler