The only man to ever defeat Barack Obama in an election was escorted off the House floor Wednesday morning.

Bobby Rush (D., Ill.) was booted from the floor for a dress code violation. Rush, co-founder of the Illinois Black Panther Party, removed his suit jacket to reveal a hooded sweatshirt and later donned sunglasses, while delivering a Bible-laced rant on Trayvon Martin, the Florida teen killed by a neighborhood watchman in February... 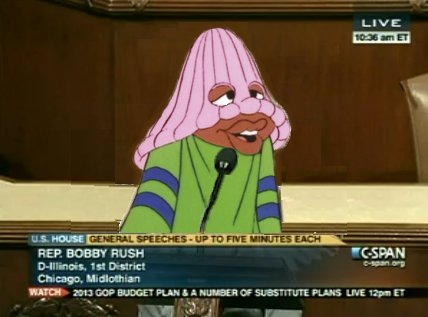 “Just because you wear a hoodie doesn’t make you a hoodlum,” he said.

The speaker pro tempore banged his gavel several times throughout the exchange, but Rush refused to yield the floor. After 90 seconds, he ordered Rush removed.

House rules do not permit hats or sunglasses.

Bobby Rush may be a "statesman" as far as Democrats are concerned, but he's no Hank Johnson.

When I first saw this reported on breitbart, I was curious about Rush's background, so loaded wiki's entry:

Bobby Lee Rush (born November 23, 1946) is the U.S. Representative for Illinois's 1st congressional district, serving since 1993. He is a member of the Democratic Party.

The district is located principally on the South Side of Chicago. It is a minority-majority district and has a higher percentage of African Americans (65%) than any other congressional district in the nation. Rush has the distinction of being the only person to defeat President Barack Obama in an election for public office, when Obama challenged him in a primary election in 2000. Rush is a member of the Congressional Black Caucus.

After dropping out of high school, Rush joined the U.S. Army in 1963 but went AWOL and received an honorable discharge in 1968. Throughout the 1960s Rush was involved in the civil-rights movement. He worked in civil-disobedience campaigns in the South, and co-founded the Illinois chapter of the Black Panthers in 1968 and was made its "defense minister".

Is it any wonder the Democrats have such PRIDE?