If you've been waiting for Obama Nail Polish™, I have only two words for you. You're welcome.

They're real. And they're spectacular. 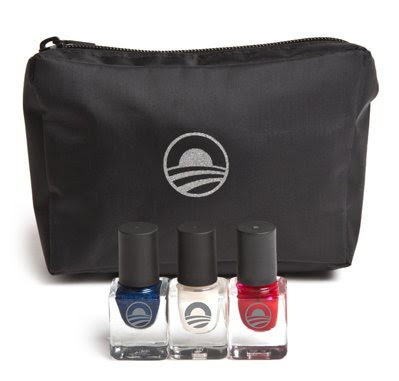 [T]he Obama campaign is again trying to inspire the youth vote in a way that goes beyond the same old buttons, lapel pins, and posters. In fact, we recently heard that the POTUS has teamed up with cosmetics company Le Métier De Beauté to create a set of three mini nail polishes — in patriotic red, white, and blue, of course — plus a simple black carrying case, all emblazoned with the horizon symbol from 2008.

I get the impression that the Axelrod Obama campaign would sell tiny urn necklaces with Stanley Ann Dunham's ashes in them if they thought they could raise six figures.

at 5:52 PM
Email ThisBlogThis!Share to TwitterShare to FacebookShare to Pinterest
Labels: Democrats, Obama

obama nail polish to go along with the campaigns new t shirt....
http://www.theblaze.com/stories/obama-campaign-selling-bfd-health-care-t-shirts/

They only needed to have the color red.