Turns out a third American law enforcement officer came close to losing his life thanks to the aborted Holder-Obama gun-running operation known as "Fast and Furious". 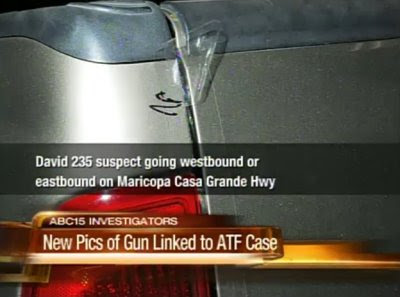 BC15 Investigators have obtained a police report, audio recordings, and photographs of a weapon linked to the Fast and Furious case after it turned up at a crime scene in Maricopa, AZ in March 2010... 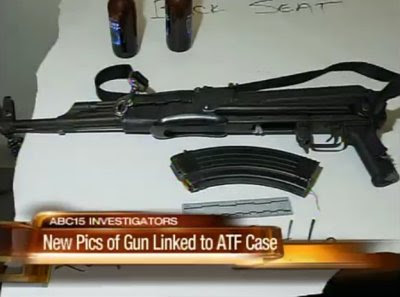 According to an Arizona Department of Public Safety police report, members of a special vehicle theft task force were attempting to pull over a truck that had been stolen from Avondale when the driver fled and then pointed a handgun at an officer... According to the police report, the driver, Angel Hernandez-Diaz, also had an AK-47 semi-automatic assault rifle in his possession during the vehicle chase... The AK-47, according to the ATF, is linked to the Fast and Furious case. 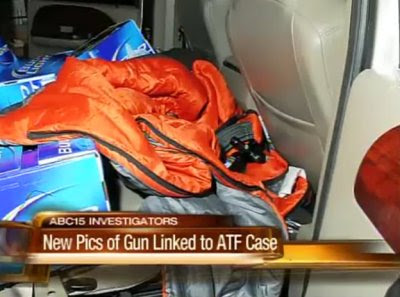 ...According to the police report, Hernandez-Diaz was attempting to transport the weapon and the vehicle to a drop-off point in the desert... 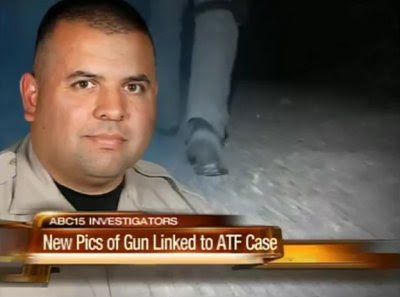 According to Ofc. Mike Ruiz, an officer involved in the pursuit, Hernandez-Diaz’s vehicle had been disabled by a spike strip when Hernandez-Diaz took off running from the truck... “I saw the suspect bail out of the vehicle,” Ruiz told a DPS investigator during an interview about the incident. 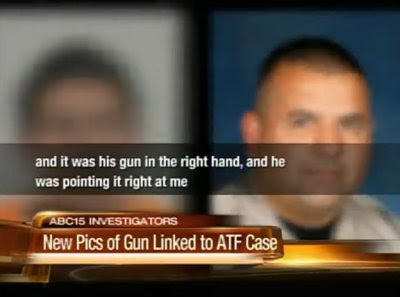 “I pulled up, exited my vehicle, (and) yelled, ‘Police! Stop!” he said, explaining how he followed Hernandez-Diaz around a corner. 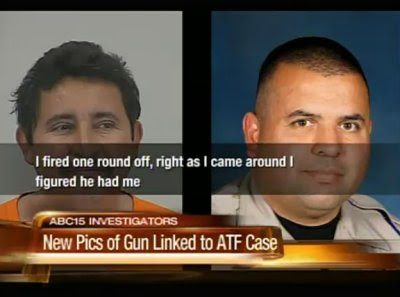 “Right as I came around that corner…he was almost down to…almost like crouched but not quite a crouch,” he told the investigator, describing Hernandez-Diaz... “With his gun in the right hand…and he was pointing it right at me,” Ruiz said. “I fired one round off…and I figured he had me.” 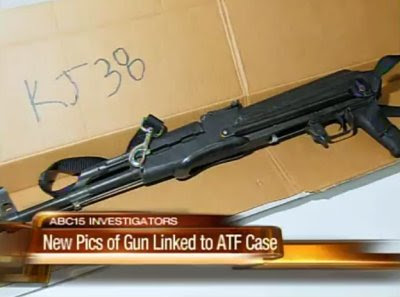 ...Ruiz’s bullet did not strike Hernandez-Diaz, but the suspect was taken into custody and convicted of possessing two guns that were found inside the stolen truck, stealing the truck, and running from officers.
The gun Hernandez-Diaz was accused of pointing at Ruiz was never found. However police found two weapons inside the stolen truck: the AK-47 and a Beretta pistol...

Thousands of Holder's weapons are still unaccounted for.

How many more law enforcement officers and civilians will be killed thanks to Fast and Furious?

That's a rhetorical question, because the shameful Holder still serves as Attorney General, despite lying to Congress, stonewalling it, and acting as if he is above the law.

It will take a new president to get to Eric Holder.

Eventually Holder will have plenty of time next to Obama in Super Max to think about his crimes, the short list being conspiracy, aiding and abetting, accessory to murder, lying to Congress, and carrying water for the jug eared undocumented Kenyan. A real poltroon this one.

Eventually Holder will have plenty of time next to Obama in Super Max to think about his crimes, the short list being conspiracy, aiding and abetting, accessory to murder, lying to Congress, and carrying water for the jug eared undocumented Kenyan. A real poltroon this one.

"The scope of the lawless disregard for The Rule of Law expands exponentially by the day by the very nature of corruption of the elites lust to retain absolute power." Me

Between the Chief "Law Enforcement" executive Holder, and the chief Executive of the United States obama, with assistance of the Secretary of State Hillary Clinton, we The People are being tagged teamed by instruments of tyranny occupying the highest offices of trust in the land.


Conspiracy Gunwalker brought to you by Barrack Obama/Eric/Holder/Hillary Clinton. Crisis as a means baby! Create a narrative based on a tragedy,(90 % of guns used by Mexican drug cartels obtained at legal US gun shops), fabricated by the very president of the United States, with the supervision of the highest law enforcement officer of the land, and the blessing of the Secretary of State. Paid for with our tax money no less. For the purpose of creating a lie, that would be turned into the "Truth" through the 5th column of the legacy media, that would provide political leverage to disarm America, and proceed to full blown tyranny, where said Americans would not have the 2nd Amendment means to throw off tyranny.

Hitler said it best:
"It is convenient to have a system of laws where everyone is a criminal."

If you have doubts, these words by the greatest genocidal maniac to rule of men had this to say. By the way, this psychopath's likeness on a "Christmas" ornament was hung on the White House Christmas Tree:

"Every Communist must grasp the truth, “Political power grows out of the barrel of a gun.” "Our principle is that the Party commands the gun, and the gun must never be allowed to command the Party."
– Mao Tse-tung
November 6, 1938

And what about all those millions of bullets that the government just ordered? For what?