Of course they do: GM blames owners for Chevy Volt's melting cord problems

Aside from the occasional fires, explosions, and melting power cords, the Volt seems like an outstanding choice of vehicle. 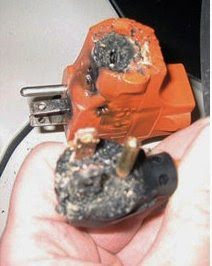 ...About eight months ago some owners of Chevy Volts complained that charging cords were overheating, sometimes to the point of melting. At the time, GM blamed owners, saying the wall outlets were the culprits. We now finally have GM addressing the safety concerns and agreeing to replace charging cords for all 9,500 Volts that have been sold since production began. But in what is becoming a new public relations precedent, the move is not being called a "recall."

The non-recall recall is instead referred to as a customer satisfaction action which is designed to "offer a more consistent charging experience." The political strategy is becoming more and more evident at GM as Chevy Volt sales continue to struggle...

...We now have the second non-recall at GM for the Volt. The first non-recall was for reinforcements to the battery pack after test vehicles at NHTSA ignited days after crash tests. In both cases, GM was adamant that there is absolutely nothing wrong with the Volt; it is either the fault of owners with faulty wiring or right-wing media sources. Just in case the denials are not enough to convince the voting...I mean the car buying public, GM has stepped up ad spending for the Volt on those TV networks that are accused of criticizing the car. The spending seems to be quieting the criticism.

And the Volt is truly a car for every American, what with a sticker price around the low, low price of $41K.

Considering that each Volt cost taxpayers a mere $250,000 apiece, that MSRP seems like quite the bargain.