Turns Out Bluto Really Did End Up In Congress: Keith Ellison Asserts That the Nazis Bombed Pearl Harbor

Yes, this is what passes for informed commentary among the intelligentsia of the Democrat Party. And these are the idiots who want to rule our health care, our access to energy, our automobiles, our light bulbs, our toilet paper, our factories, and every other aspect of our lives they can think of.

Stork: Well, what the hell we s'posed to do, you moron?

D-Day: War's over, man. Wormer dropped the big one.

Bluto: Over? Did you say "over"? Nothing is over until we decide it is! Was it over when the Germans bombed Pearl Harbor? Hell no!

Bluto: And it ain't over now. 'Cause when the goin' gets tough... [pauses to remember the rest of the phrase] ...the tough get goin'! Who's with me? Let's go! [runs out, alone; then returns] 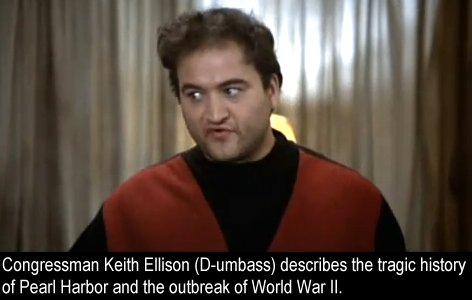 Bluto: What the f*** happened to the Delta I used to know? Where's the spirit? Where's the guts, huh? This could be the greatest night of our lives, but you're gonna let it be the worst! "Ooh, we're afraid to go with you Bluto, we might get in trouble." Well, just kiss my ass from now on! Not me! I'm not gonna take this! Wormer, he's a dead man! Marmalard, dead! Niedermeyer—

Otter: Dead! Bluto's right. Psychotic, but absolutely right. We gotta take these bastards. Now we could do it with conventional weapons, but that could take years and cost millions of lives. No, I think we have to go all out. I think that this situation absolutely requires a really futile and stupid gesture be done on somebody's part.

Bluto: And we're just the guys to do it.

So it turns out that Bluto really did end up in Congress!

Congressman Keith Ellison (D-Minn.) made some astonishingly ignorant statements during a discussion about the Iranian nuclear issue on Fox News's The O'Reilly Factor Tuesday... The pièce de résistance was him telling host Bill O'Reilly that the Nazis bombed Pearl Harbor...

CONGRESSMAN KEITH ELLISON (D-MINNESOTA): No, they [Iran] don’t have a weapon. They have not made a decision to do one. The inspections… 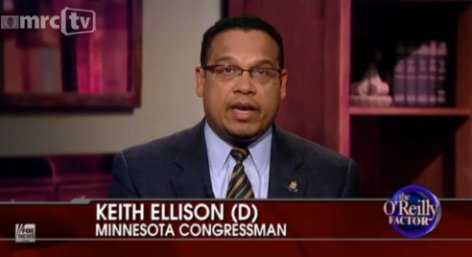 ELLISON: Because. I’m glad you asked. Because we have satellite technology. We have technology that can detect.

ELLISON: We have inspections that have gone on.

O’REILLY: They won’t let the inspectors in as I’ve said three times.

ELLISON: Yes they have. There have been a number of inspections.

O’REILLY. No there haven’t. They went two weeks ago and they wouldn’t let them go in.

ELLISON: Well, Bill, I’m sorry, but I’m not going to back a war based on a maybe. 4,409 Americans are dead because somebody—

O’REILLY: No, this is the German theater not the Japanese.

I suggest that we start a Twitter meme -- hashtag #EllisonHistory -- to memorialize Bluto Ellison's brilliance.


Postscript: I haven't been over to Ace's place yet today, but I have the sinking feeling that he beat me to this precise post -- only about 75 times funnier.

Ugh. Dan Quayle is forever lambasted for misspelling a word while liberals who couldn't find their own arses with a map and a flashlight continue along unscathed.

Whoever thought of the Animal House reference: awesome!
But I have one minor quibble. Ellison indeed probably was thinking that the Nazis bombed Pearl Harbor. But he did simply used the word "they" He could easily respond that he was talking about the Japanese, but he just loosely threw out the pronoun "they", not realizing that it was right on the heels of O'Reilly's referring to the Germans. So, Ellison has a handy explanation, one that he could convincingly use, for his seeming ignorance of history, even though it is likely to be false.

this is what black people voted to represent them? a mindless turd? a village idiot? I guess being a rabid leftist/fascist anti-american muslim was good enough for the blacks who voted this scumsucker into any position of power where he can then work to enslave my family and kids into a Marxist Hell.

sure getting us back, aren't ya?

you have about 7 more months. then it all ends, dbags.

this guy Ellison works for a different country than we live in. he works against America not for it. Islam is incompatible with our Constitutional Republic, sorry, it just is. add in ignorance of basic history, and you have a disaster lording over us.

same with the other genius, Johnson? the dummy who said Guam would capsize?

I mean who picks these mental midgets? there loads of smart black people who deserve to be in leadership roles, and who don't shrink from responsibility, yet they are looked down upon or denigrated by their own people. why?

cause the Left is built on Hate.

too bad you have to give credence to o'really....