No wonder Obamacare forces insurers to cover "children" up to age 26: unemployment for 18-24 year olds is 46%

If we get a couple more years of Obamanomics, I see Kathleen Sebelius requiring health insurers to cover "children" up to age 45.

A month ago, Zero Hedge readers were stunned to learn that unemployment among Europe's young adults has exploded as a result of the European financial crisis, and peaking anywhere between 46% in the case of Greece all they way to 51% for Spain... 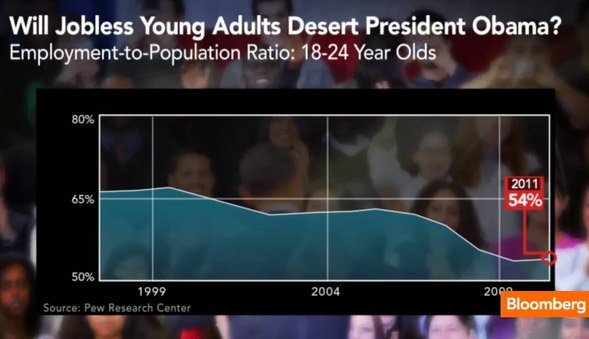 Which makes us wonder what the reaction will be to the discovery that when it comes to young adults 18-24) in the US, the employment rate is just barely above half, or 54%, which just happens to be the lowest in 64 years, and 7% worse than when Obama took office promising a whole lot of change 3 years ago.

Oh, and I forgot the main point of the Zero Hedge article, which wasn't unemployment.

Fitch discloses something rather troubling, namely that of the $1 trillion + in student debt outstanding, "as many as 27% of all student loan borrowers are more than 30 days past due." In other words at least $270 billion in student loans are no longer current. That this is happening with interest rates at record lows is quite stunning and a loud wake up call that it is not rates that determine affordability and sustainability: it is general economic conditions, deplorable as they may be, which have made the popping of the student loan bubble inevitable. It also means that if the rise in interest rate continues, then the student loan bubble will pop that much faster, and bring another $1 trillion in unintended consequences on the shoulders of the US taxpayer who once again will be left footing the bill.

Oh, and kids: you know better than anyone that student loans can't be discharged. Bankruptcy won't do it. Maybe death will.

And, of all age groups, "this is the one that has actually seen its wages drop the most under the Obama administration."

Shouldn't this sticker read "Zero the Hope, Double the Change" ?

If the Supreme Court upholds National Socialized Obamacare it will meant the death of the Constitution and our Representative Republic.