Surely it can come as no surprise to the anti-American Left -- i.e., the Democrat Party -- that the U.S. military despises Barack Obama. After all, this is the president who promised to "fundamentally transform" America, and started by gutting NASA, all branches of the service, and our nuclear deterrent force.

Sgt. Gary Stein might be saying things about President Obama that a lot of Marines think, but some are saying he took it too far.

Stein has come under fire for stating on Facebook that he wouldn’t follow certain orders given by his commander in chief. And Marines say Stein’s not alone in his disapproval. More anti-Obama talk is being heard in the workplace and new Military Times poll data shows declining approval among military service members for the president’s job as commander in chief. 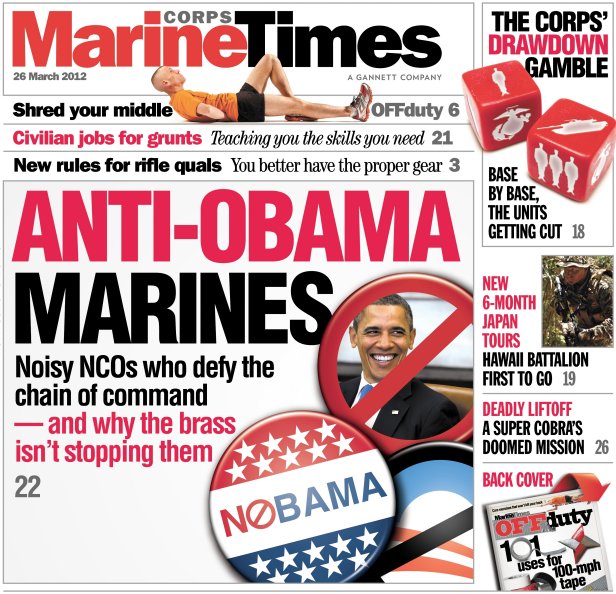 The Marine Corps depends its chain of command structure, especially in a time of war. Some Marines say Stein and other vocal Marines like him are undermining that system.

The full article requires a subscription, but suffice it to say this behavior is simply quid pro quo.

A president who has defied multiple court orders, operated outside the bounds of the Constitution on numerous occasions, and runs arguably the most lawless administration in history should know: what goes around comes around.

Who will be the first ninny to suggest that the red circle on NObama are cross hairs??

I know that my 1LT son does not approve of the President, but he will not openly say anything disrespectful about the Commander in Chief even to me.

This SHOULD wake obammy up to the fact that if he orders the US military to turn their guns on US citizens he will be in for a terrible shock.
I swore the oath to the USA when I enlisted....And the UCMJ states it is your DUTY to refuse to follow a unlawful order.
Even the "kids" in uniform know what that means even if the currrent administration doesnt