Just when you think the record for cynicism has been set by this administration, they bust through to a brand new sub-basement of immorality.

The official Obama team is now pushing the Obama hoodie.

[There are significant exmaples] of the sentiment Barack Obama is stirring up by promoting hoodies. Along with that, an Internet search for George Zimmer's home phone number and street address documents that they are now being widely distributed by a large number of the same individuals seizing the "hoodie" sweatshirt as a symbol representing their anger. Many of those tweets are calling for Zimmerman's death.

Is there anything David Axelrod won't say or do to raise money?

For you drones and miscreants reading along: that's a rhetorical question.

As a reminder, the initial television reports of the incident included interviews with a witness who stated that Trayvon was on top of Zimmerman pummeling him.

The witness also said that as Zimmerman was being attacked by Trayvon Martin, he was screaming for help. 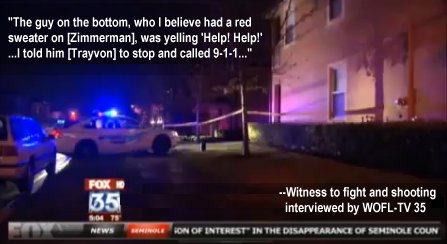 The neighborhood where Zimmerman was helping to patrol as part of a local watch program had suffered eleven (11) break-ins in recent weeks.

But when it comes to dividing Americans along racial, ethnic, income, religious or other arbitrary lines, no administration in history has created as much angst as this one. One can only come to the conclusion that President Obama and his supporters are rooting for civil unrest.