This is six-year old Aliyah Shell, one of 10 killed and 50 wounded last weekend in Chicago. So where are the professional race-baiters?

At 3:00pm on Saturday afternoon, 6-year old Aliyah Shell was sitting with her mother and sister on the front porch of her home in the 3100 block of South Springfield Avenue. A pickup truck drove by, slowed to a near stop and the passenger side window rolled down. Shots rang out. 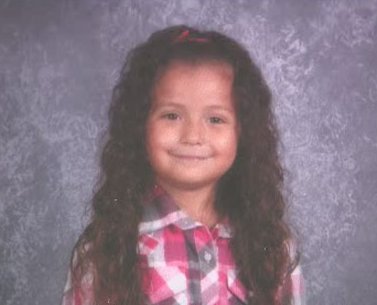 Aliyah Shell was killed by the gunfire as the truck drove off.

At least 10 people were killed, including a 6-year-old girl, in shootings over the weekend in Chicago... The slain were among at least 49 people wounded in shootings from 5 p.m. Friday to 6 a.m. Monday...

So where are the professional race-baiters like Al "Not So" Sharpton and Jesse Jerkson?

Where is MSNBS, ABS, CBS and NBS Nightly News?

Where are the New Black Panthers and the other thugs seeking to profit from Trayvon Martin's death?

They don't give a crap about Aliyah Shell, or the hundreds of others killed and wounded every year in Obama's hometown of Chicago.

No, they care only about fomenting hatred, division and dissent. They studiously avoid the ramifications of their failed policies, from the "Great Society" to the "War on Poverty".

All Americans -- citizens of every race, creed, religion and color -- should reject the Democrat Party and its vicious marketing of racial hatred.

OOh, and don't forget gun control. They are using the Martin case to call for more gun control in FL and yet Chicago has some of the strictest gun control laws in the country. That's obviously working out real well. Can't shine the light on more failed lefty freedom-killing policies, now can we?

Dude, are you really trying to say Obama has something to do with crime in Chicago? You wingnuts have a bad obsession with Obama. Maybe think about seeing a shrink about it?

This little girls' death does not benefit obama.

Here's how Chicago's inner city is linked to Obama and the Democrats' failed policies.

Yes, dear Carlito, Obama does have "something to do with crime in Chicago".

And he has something to do with crime in Florida and everywhere else. Obama is a despicable racist.

His equally racist so-called "Justice" department Attorney General Holder has said 'black' criminals are 'his own people' and he won't prosecute them.

I call that having something to do with encouraging crime in Chicago.

In Florida Obama spoke lovingly of black Trayvon Martin, a playa in the 'nigga' culture (he called himself that, I am only quoting). Obama likened him to a 'son'. Well, Treyvon Martin was shot dead by a Hispanic (Peruvian) volunteer watchman he apparently attacked, at night while trespassing in a mixed ethnic gated community. But Obama said Treyvon Martin reminds him of his own daughters and said ""If I had a son he would look like Treyvon." (click link) Martin's history isn't looking very good, by the way.

Obama and his "Justice" department wasn't interested when the race-baiters (Sharpton, Jackson, Black Panthers, etc) arrived to cash in on that case and start publicly threatening violence and race rioting.

At the same time in Florida, a subhuman 'black' who killed two young white British tourists while he humiliated them by making them lower their pants while they begged for their lives on a public street was sentenced to prison for life. The parents of the tourists had written three times to Obama, but he didn't give a damn and never even had someone write back with some sympathy.

In fact black killers and black victims doesn't interest him either.

So Obama does have something to do with crime in Chicago, because that is what goes on there -- day after sad, sad day.

So, if Obama had spoken publicly about the British tourists murders or the killing of the Chicago girl or about any other murders in the US, it would therefore affect crime in Chicago or anywhere else?

If you believe that, there is a nice bridge in Brooklyn that might interest you.

This may be the most ignorant post ever. This is horrible and those responsible should be brought to justice but did the cops know who did it and not press charges? What does Obama have to do with this? Do we blame the bushes for everything that happens in Texas? Get a life!

Hey, IrregularAmerican - the point, dumbass, is that the media, Al Sharpton, Jesse Jerkson, and Obama are jumping to the defense of Trayvon Martin. Where are these idiots -- yes, I said it: idiots! -- when it comes to Aliyah Shell and the thousands of murders every year in Democrat strongholds like Chicago and DC?

I won't hold my breath waiting for an answer.

Where is her Rally? why don't we see people marching in the streets for her?

Where is justice for Aliyah! Where's the support for the grieving Mother? Where is the media coverage and the calls to stop the gang violence?

Find your own using google, if you like:
https://www.google.com/search?q=antiviolence+march+chicago+2012