A review of Clinton’s stated positions on the issue suggests she is perhaps the most extreme candidate on immigration ever to run for the office of the U.S. Presidency. Her views place her even further outside the mainstream of the American electorate than President Barack Obama, who systematically dismantled U.S. immigration law during his two terms in office.

Below are just a few of the extreme immigration positions held by Clinton.

Perhaps one of the most radical aspects Clinton’s open borders platform is that she is openly campaigning on defending and even expanding President Obama’s unconstitutional executive amnesties.

“You can count on me to defend President Obama’s executive actions on DACA and DAPA when I am president,” Clinton said, referring to Obama’s 2012 (DACA) and 2014 (DAPA) executive amnesties, which gave work permits and access to federal benefits to millions of illegal immigrants. 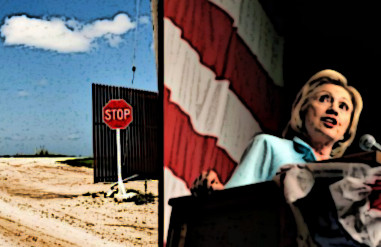 Clinton’s campaign website states that, as President, she will “defend President Obama’s executive actions to provide deportation relief for DREAMers and parents of Americans and lawful residents.” Meaning, Clinton will allow millions of illegal immigrants to remain in the United States, receive work permits to legally fill American jobs, and get access to federal benefits paid for by U.S. taxpayers.

In addition, Clinton’s website says she will “extend those actions to additional persons with sympathetic cases if Congress refuses to act.”

If Congress continues its refusal to act on comprehensive immigration reform, Hillary will put in place a simple, straightforward, accessible system for parents of DREAMers and others with a history of service and contribution to their communities to be able to make their case and be eligible for deferred action as well.

However, as Sen. Jeff Sessions has pointed out, Congress has acted on so-called “comprehensive immigration reform” and it has rejected it. Sessions explains that the reason any executive-ordered amnesty is unconstitutional is because “the President’s action erases the laws Congress has passed in order to implement laws Congress has refused to pass.”

Moreover, according to an October Rasmussen survey, most Americans still oppose Obama’s unconstitutional executive amnesty. A Kellyanne Conway poll found that by a 2-1 margin, voters believe that illegal immigrants should be encouraged to return home by shutting off their access to U.S. jobs and welfare.

Clinton’s website has explained that by “comprehensive immigration reform,” Clinton means full citizenship for illegal immigrants, which would give them welfare access, voting privileges, and the ability to bring over their family members through chain migration.

“As president, Hillary will fight for comprehensive immigration reform that provides a full and equal path to citizenship,” Clinton’s website states.

Full amnesty for the illegal immigrant population will cost U.S. taxpayers $6.3 trillion, according to a report from the Heritage Foundation.

Clinton’s pledge for amnesty perhaps explains why she won the endorsement of open borders advocate Luis Gutierrez–who has previously said “I have only one loyalty… and that’s to the immigrant community.”

In return, Clinton has heaped praise on Gutierrez, declaring that “few people have done as much as Luis to make sure that when it comes to America’s policies on immigration, those policies reflect America’s values. He organizes, strategizes, preaches, teaches, inspires, cajoles, whatever it takes to keep this movement moving forward.”

Interestingly, Paul Ryan also won the early endorsement of Gutierrez prior to being elected as House Speaker. As Bretibart News has previously reported, Ryan’s views on foreign migration, foreign trade, and foreign wars are more similar to Hillary Clinton’s views than those of GOP presumptive nominee Donald Trump.

Clinton has said that, as President, that she will essentially freeze deportations.

“I would not deport children. I do not want to deport family members either,” Clinton declared in March. Clinton’s pledge not to enforce U.S. immigration law as President represents an essentially unprecedented departure from the nation’s history of enforcing immigration law.

As the Washington Post reported: “Clinton’s pledge not to deport any illegal immigrants except violent criminals and terrorists represents a major break from President Obama, and it could vastly increase the number of people who would be allowed to stay in the country.”

Clinton’s vision erases entirely the protections that U.S. immigration laws are supposed to afford American citizens: such as protecting Americans from losing a job to an illegal immigrant, preventing the sapping of school and hospital resources, as well as defending the voting privileges and enfranchisement of U.S. citizens (giving citizenship to illegal immigrants allows them to cancel out the votes of native-born American citizens).

The implication of Clinton’s platform– i.e. that illegal entry is not in and of itself a deportable offense–represents a central pillar of the open borders credo: namely, that millions of people can illegally come to the country, take jobs, attend U.S. schools, receive affirmative action, apply for federal benefits, and give birth to children who receive birthright citizenship.

Moreover, waiting until after a violent conviction has been obtained to deport an illegal alien means that immigration laws were enforced far too late–i.e. they were not enforced until after an American was victimized, raped, or murdered by a criminal alien. A federal policy that waits to enforce immigration laws until after there is a criminal conviction would mean admitting and releasing criminals by the hundreds of thousands, and letting them roam free until after they have committed a crime, and have been apprehended, tried, and convicted for that crime.

As Sen. Sessions has explained, immigration laws ought to remove criminal aliens before they are convicted of a violent crime. “Our goal should be to keep 100% of dangerous aliens out of the United States… we need to remove potentially violent offenders before they hurt innocent families—before the irreversible occurs.”

Even as tens of thousands of migrants continue to pour across our southern border, Clinton has declared that the border is “the most secure border we’ve ever had”– suggesting that she does not feel it is necessary to take additional actions to secure it. Clinton argues that since the border is already secure, it is time to give amnesty to the millions of migrants who have entered illegally.

“We have the most secure border we’ve ever had… The Republicans, the opponents, no longer have an argument,” Clinton said during a March CNN/Univision Democratic debate. “We enhanced the border security. That part of the work is done… Everybody who I know who has looked at it says it is OK. We have a secure border. There’s no need for this rhetoric and demagoguery that still is carried out on the Republican side. You’ve run out of excuses. Let’s move to comprehensive immigration reform with a path to citizenship.”

“Hillary believes we should end family detention for parents and children who arrive at our border in desperate situations. We have alternatives to detention for those who pose no flight or public safety risk, such as supervised release,” Clinton’s website explains.

This again represents a radical step in further dismantling what little immigration enforcement is now in place. Clinton is essentially saying that she will not detain new incoming illegal immigrants, but will instead release them into the interior of the United States.

Clinton has repeatedly said that she supports giving Obamacare to illegal immigrants. Clinton’s website says that Clinton wants to “Expand access to affordable health care to all families… She believes we should let families—regardless of immigration status—buy into the Affordable Care Act exchanges.”

Clinton has pledged to use federal resources to ensure that millions of more foreign migrants are able to vote in U.S. elections:

There are millions of people in America who could be naturalized, but for one reason or another, they’re not. So let’s help more of our neighbors claim their rights. It’s so powerful, so precious, to be a citizen of the United States!

To be able to vote in our elections, to have a voice in our future, and I want to take down the barriers that are holding people back. So here’s a few things I will do: I will work to expand fee waivers, so more people seeking naturalization can get a break on the costs. I will increase access to language programs to help people boost their English proficiency. I will enhance outreach and education so more people know their options and are engaged in the process. I don’t want anyone who could be a citizen to miss out on that opportunity.

Political scientists have documented how mass immigration helps Democratic politicians. As University of Maryland’s James Gimpel noted: “the enormous flow of legal immigrants into the country — 29.5 million 1980 to 2012 — has remade and continues to remake the nation’s electorate in favor of the Democratic Party.”

Reuters has similarly reported: “Immigrants favor Democratic candidates and liberal policies by a wide margin, surveys show, and they have moved formerly competitive states like Illinois firmly into the Democratic column and could turn Republican strongholds like Georgia and Texas into battlegrounds in the years to come.”

Hillary Clinton has called for a massive expansion in Middle East migration.

“I’ll work to ensure that every single refugee who seeks asylum in the United States has a fair chance to tell his or her story, this is the least we can offer people fleeing persecution and devastation,” Clinton said in December.

As Breitbart News has previously reported, below is a more detailed breakdown of Islamic migration that would occur in her first term under the minimum numbers she has put forward thus far:

– 374,000 refugees/asylees from the Middle East during her first term, based on DHS data.

– 420,000 refugees/asylees from the Muslim world during her first term.

– 560,000 permanent migrants from the Middle East during her first term.

– 730,000 permanent migrants from the Muslim world during her first term.

According to a September 2015 Rasmussen survey, only 5% of likely voters said that they wanted the U.S. to admit more than 100,000 refugees from the Middle East.

Women oppose Clinton’s plan to bring more than 100,000 refugees from the Middle East by a remarkable 21-to-1 margin, with 84 percent opposing and four percent supporting.