Spotted at Western Rifle Shooters Association, this helpful infographic summarizes the wonderful popularization of gun ownership, the rampant weakening of unconsitutional gun control laws, and the ascent of concealed carry among the American population. 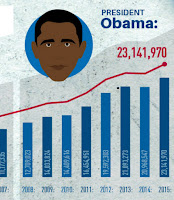 Obama's legacy will include, at a minimum, the following historical benchmarks:

• The appreciation of Smith & Wesson stock by a mere 1,100 percent (coulda, shoulda, woulda)
• Increasing Black Friday gun sales each and every year since 2009
• A tripling of aggregate gun sales when comparing the Bush and Obama administrations