Despicable Weasel Harry Reid (Which Is the Term He Prefers, I Hear) Finally Breaks the Hypocrisy-Meter

In advance of Harry Reid’s press call on the Supreme Court this afternoon, AR2 thought it was important to again point out his past hypocrisy and his tendency to play politics with this issue.

Remember, in 2005, Reid said on the Senate floor that nowhere in the Constitution “does it say the Senate has a duty to give presidential nominees ‘an up or down vote.’” 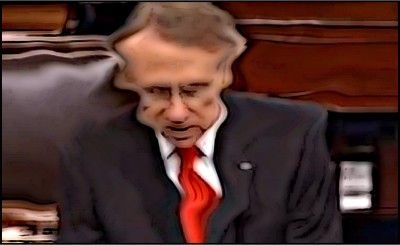 What’s even more ludicrous than his clear hypocrisy now is the fact that he refuses to acknowledge it. He was pressed on this by Chuck Todd on Meet The Press but continued to obfuscate and even claimed, “I’ve always, I’ve been very firm,” on this issue.

In the immediate aftermath of Justice Scalia’s death, Reid’s strategic calculation was already at work, trying to score political points by urging President Obama “to pick someone to pressure Senate Republicans:”

“Senate Minority Leader Harry Reid and several other Democrats, for instance, want Obama to pick someone to pressure Senate Republicans — someone who they would ordinarily support but are only opposing now because it’s an election year.”

The bottom line is the Harry Reid does not care about the American people’s opinion and does not want them to have a voice in the make-up of Supreme Court. His deliberate political posturing is beneath the legacy of Justice Scalia and the American people should be very aware of his attempts to circumvent their voice from this process.