The Editorial Board of the NY Times is Very Concerned about the state of the nations in South America, noting just how bad it all is, thanks to Leftism

The Left on the Run in Latin America

In 2004, President Hugo Chávez of Venezuela and the Cuban leader, Fidel Castro, launched the Bolivarian Alternative for the Peoples of Our Americas, a regional alliance of leftist leaders designed to subvert a hemispheric free trade agreement that the United States had been pushing for a decade.

In the years that followed, Washington’s hope of a trade pact of 34 nations faded, and its clout in the region diminished as voters across much of Latin America put their faith in firebrand politicians who promised to spread the wealth of a commodities boom and topple old elites. The region’s exports to China increased 25-fold between 2000 and 2013, allowing Brazil, Argentina, Venezuela and Bolivia to bankroll generous welfare and social programs that lifted millions from poverty.

So, the Bolivarian Alternative started just 12 short years ago. Now? 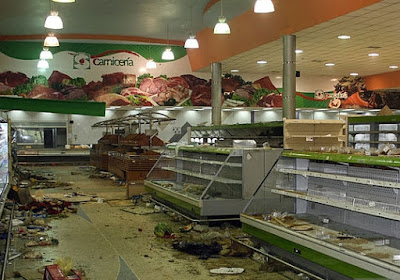 But today, Latin America’s leftist ramparts appear to be crumbling because of widespread corruption, a slowdown in China’s economy and poor economic choices. For the most part, leaders failed to create diversified economies capable of withstanding slumps...

In other words, they instituted hardcore Progressivism (you can call it Socialism, Marxism, Communism, Leftism, whatever), vastly increased the power of their central governments, played games with redistribution and Promises to citizens, restricted this and that, enabled vast government interference in their economies, even nationalized certain sectors, and failed badly. Surprise! Let’s not forget that one of the worst, Venezuela, can’t even get toilet paper and beer, much less food. Yet, the nation is oil rich. Leftism fail.

Of course, now, many of those nations are looking back to the United States.

The United States can help its neighbors become more competitive and stable by promoting investment in technology, innovation and high-quality education. It can point to the security turnaround of Colombia, which has one of the growing economies in the region, as evidence of the potential of sustained security partnerships. Washington can do more to help Central American and Caribbean nations find sustainable sources of energy, now that they can no longer count on subsidized oil from Venezuela. It also can support anticorruption initiatives that citizens around the hemisphere are clamoring for.

Yet, a brighter future for struggling Latin Americans cannot depend on the United States. Ultimately, that will require leaders who are accountable to their citizens, are willing to invest in long-term prosperity rather than their political brands and stand ready to acknowledge the colossal mistakes of their predecessors.

Their colossal mistake was following Leftist principles and thinking they would work. They aren’t working too well here, where Obama will be the only president to never see yearly GDP growth of 3% in any year.