OBAMA LACKEY: Yeah, We Lied to Sell the Iran Agreement to Congress

President Barack Obama’s deputy national adviser for strategic communications admitted that the administration’s fundamental selling point for the nuclear deal with Iran was false, according to a profile written by David Samuels and published Sunday in The New York Times magazine.

Ben Rhodes, described as having a “mind meld” with Obama, spoke about the pair’s contempt for “the Blob,” or the existing foreign policy establishment.

“We can do things that challenge the conventional thinking that, you know, ‘AIPAC doesn’t like this,’ or ‘the Israeli government doesn’t like this,’ or ‘the gulf countries don’t like it,'” Rhodes told Samuels. “It’s the possibility of improved relations with adversaries. It’s nonproliferation. So all these threads that the president’s been spinning — and I mean that not in the press sense — for almost a decade, they kind of all converged around Iran.”

Samuels explained that, according to the narrative that Rhodes constructed to sell the nuclear deal, negotiations “began in 2013, when a ‘moderate’ faction inside the Iranian regime led by Hassan Rouhani beat regime ‘hard-liners’ in an election and then began to pursue a policy of ‘openness,’ which included a newfound willingness to negotiate the dismantling of its illicit nuclear-weapons program.”

Rhodes added that the administration relied on uninformed journalists to spread this narrative.

In the spring of last year, legions of arms-control experts began popping up at think tanks and on social media, and then became key sources for hundreds of often-clueless reporters. “We created an echo chamber,” he admitted, when I asked him to explain the onslaught of freshly minted experts cheerleading for the deal. “They were saying things that validated what we had given them to say.”

However, Samuels pointed out that the idea that serious negotiations with Iran began with the election of Rouhani was “actively misleading,” because “the most meaningful part of the negotiations” had already taken place in the middle of 2012. (According to Iranian media reports, negotiations began as early as 2011, with the United States conceding to Iran the “right” to enrich.) 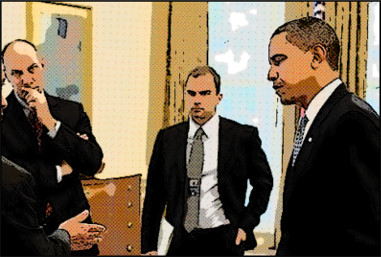 Rhodes would also not acknowledge that Rouhani was a moderate, despite portraying him as such in the administration’s narrative. “Yes, I would prefer that it turns out that Rouhani and [Iranian Foreign Ministger Mohammad Javad] Zarif are real reformers who are going to be steering this country into the direction that I believe it can go in, because their public is educated and, in some respects, pro-American,” he said. “But we are not betting on that.”

This skepticism was echoed by Leon Panetta, formerly the secretary of defense and head of the CIA, who said that his agency never assessed “that the Iranian regime was meaningfully divided between ‘hard-line’ and ‘moderate’ camps,” according to Samuels.

This revelation helps confirm multiple past reports that challenged the administration’s claim that Rouhani was a moderate.

Shortly after Rouhani’s 2013 election, veteran Israeli journalist Yossi Melman wrote in The Tower about a biography of Rouhani that was circulating in Iran. Among other details, Melman’s report noted that in 1999, Rouhani’s son committed suicide and left a note that read in part, “I’m ashamed to live in such environment where I’m forced to lie to my friends each day, telling them that my father isn’t part of all of this. Telling them my father loves this nation, whereas I believe this to be not true. It makes me sick seeing you, my father; kiss the hand of Khamenei.” Melman assessed that Rouhani might change the tone of the Iranian government, but not its substance.

Subsequent reports in The Tower noted that Rouhani was involved in Iran’s Special Affairs Committee, which helps target dissidents domestically and abroad, and was described by Karim Sadjadpour, an expert on Iran, as “a consummate regime insider.” It was further reported that Rouhani’s cabinet was filled with officials attached to both the intelligence ministry and the Islamic Revolutionary Guard Corps.

Of particular note was also Rouhani’s appointment of Mostafa Pour-Mohammadi as Justice Minister. Pour-Mohammadi had earned the nickname of “Minister of Murder” for his role in the summary execution of tens of thousands of dissidents in the 1980’s. Confirming the fears of human rights activists at the time, the United Nations reported earlier this year that executions in Iran under Rouhani and Pour-Mohammadi have risen to a ten-year high.