There's an important opinion piece by former U.S. prosecutor and staunch Constitutionalist Andrew C. McCarthy that every GOP primary voter should read. You say you want the key graphs? Boom.

Donald Trump is the Washington establishment. The fact that he has not previously held public office does not make him an “outsider.” Hell, Reince Priebus — the head of the Republican National Committee — has never held public office. If the ruling class were just the officeholders, it would be short-lived. The Donald Trumps who pay the freight are the Washington establishment’s lifeblood. They are joined to the officeholders at the hip . . . or hadn’t you noticed Governor Christie shadowing The Donald?

...Take John Boehner, former House speaker, GOP establishment pillar . . . and longtime Trump golf pal. When last seen, in his Capitol Hill swan song, Boehner was courting Democrats and slamming through a budget that forfeited all Republican leverage against Obama. But with Trump kicking off his California campaign this week, there was Boehner, thrilling the campus Left at Stanford University with snipes at Ted Cruz. The Texas senator is “Lucifer in the flesh,” chortled the former speaker, and “a more miserable son of a bitch” than anyone with whom Boehner had worked in his entire life. 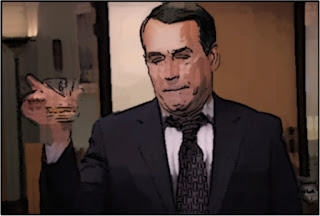 Remember: Boehner spent the last decade working with Barack Obama, Nancy Pelosi, and Harry Reid. Yet, it’s Ted Cruz he can’t abide. As it happens, Cruz and Boehner barely know each other. They overlapped in Washington for a little over one congressional term, in different chambers. They’ve exchanged few words (none of them cross, apparently) in the few times they’ve spoken, and they’ve never worked together — at least not directly. Cruz, however, is a principled conservative, who fought Obamacare to the bitter end; Boehner brought about the bitter end by pushing to fund Obamacare while pretending to oppose it... ...That experience is enough for Boehner to spew his bile and count himself as #NeverCruz . . . though he’d gladly vote for Trump, with whom he bragged of being “texting buddies.” 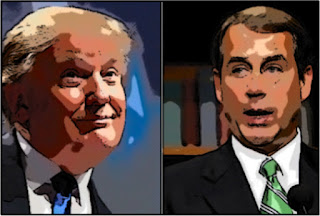 Want to know why Obamacare is fully funded? Why the meager spending caps enacted in 2011 were busted? Why the debt limit was suspended so Washington could zoom past its $18 trillion credit line? Why Obama’s lawless executive order granting de facto amnesty to illegal aliens is proceeding apace? Why Obama is emptying Guantanamo Bay and planning to transfer detainees into the United States? Why the EPA continues to implement Obama’s climate-change agenda despite a Supreme Court stay of its anti-coal regulation? Why no official was impeached and no funding was slashed when the IRS was used as a political weapon against conservative groups? Why the Justice Department has a $27 billion budget that pays for its paralyzing investigations of the nation’s police departments while the attorney general threatens new legal action against climate-change “deniers” and “anti-Muslim” speech? Thank John Boehner.

...To fight Obama on these and other progressive priorities would have required exploiting Congress’s constitutional authority, particularly the power of the purse. Boehner and other GOP leaders were given this power because voters believed their promises to fight. Empty promises...

While Boehner was surrendering, Donald Trump was backing him to the hilt: a staggering $100,000 contribution to the Congressional Leadership Fund — Boehner’s super PAC, formed largely to fend off conservative primary challenges against GOP establishment loyalists. It should be easy to remember that number, $100,000. It is the same amount Trump gave to the Clinton Foundation. That’s even more than the $60,000 Trump gave to Kentuckians for Strong Leadership, the super PAC of Senate Republican leader Mitch McConnell...

As they say on the real blogs, read the whole thing. And then pass it on.

Especially to your pals in Indiana.

It's time to take a stand against John Boehner, Mitch McConnell and the rest of the GOPe. The time is now. Take action now.

What do you call a guy that was John Boehner's attorney for a number of year?

And what do you call a guy that was an advisor to GWB?

A Washington insider aka Ted Cruz.

Boehner said what he said to cause Trump to lose delegates.

Boehner said what he said to cause Cruz to gain delegates.

Boehner needs a brokered convention to achieve his goal of a Rubio nomination.

Please don't fall for obvious deception and dirty tricks from the Establishment. Vote Trump to get him to 1,237 before the convention kicks off.

IF YOU WANT RUBIO -- VOTE FOR CRUZ

The GOP Establishment is trying to manipulate you. Do not bite on it. If you want to stop Boehner, you have to vote for Trump.

Everyone who backs Trump, please be polite to the Cruz backers. We will need their votes in a couple months.

Hmm? This COMING from the GOPe? Yeah, look. We understand that while you have surrendered, you haven't. If Trump was all in on GOPe you wouldn't say squat. Heck, they'd take you out for squealing on each other. Dude, really? You aren't even convincing each other. Are you even trying? Better luck next time. You guys really aren't good at this, or any more.

Cruz is the biggest liar since Obama..

Cruz worked on a 1996 court case involving the Florida couple who illegally intercepted and recorded a cell phone conversation between Boehner and Newt Gingrich, but Cruz wasn't on the case very long. It wasn't until 2004 that the judge awarded Boehner a tidy $1 million.

Boehner was asked about the whole ordeal by Jay Leno on "The Tonight Show" in 2014, when he called his old legal pal a "good guy,"

I think Trump has bigger issues.....

He should suspend his campaign to deal with more personal matters ... because the Republican party cannot have a pedophile as the head of the party.

All these TrumpTards look to me like they are running scared and afraid their Orange Idol will falter. If you don't want to see President Hillary, you better HOPE that Trump falters.

Afraid? We aren't the ones lying. Oh, and I'm not exactly on Trumps side. Not fully. I just know a lie when I see it. And it's all his opponents have. The way you all are playing it, many of us aren't left with much of a choice. Your Dem is showing.

sooper mexican is off his rocker..has been for a while.

No one would be challenging the establishment if not for the Trump outsider campaign.
Ted Cruz is no outsider, he is disliked.
If Trump hadn't run,Jeb would be the nominee,probably by February of this year.
All businessmen give to candidate and of both parties.

Keep trashing Trump. Throw mud at him every day if you want. I'll be voting for him in November. So will everyone else. Do you not understand that you have ZERO INFLUENCE on people? Rave all you want. All you do is waste your own time. If you TOTALLY FORBID people from voting for Tump, guess what? It will have ZERO EFFECT.