Does this DOJ memo hint that criminal action against Hillary is forthcoming?

A new filing by the Justice Department contains a key phrase that some might construe as a hint that criminal prosecution is being planned for Democratic presidential candidate Hillary Clinton.

Last week, Vice News reporter Jason Leopold formally protested the classification of an FBI declaration that provided details about the investigation into how sensitive information ended up on Clinton’s private email server.

The Justice Department submitted the declaration as part of “a secret filing,” but a U.S. District Court judge ordered them to publicly submit a redacted copy of the document or at least “show cause why” that isn’t possible.

They responded in kind by saying they couldn’t make the document public because it would “adversely affect the ongoing investigation” into Clinton’s private email server.

Fair enough, but it is two words further into the DOJ memorandum that will be sure to raise some eyebrows. The department claims it can’t reveal the document because doing so could “reasonably be expected to interfere with enforcement proceedings.” 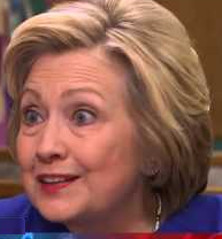 Attorneys with the U.S. Department of Justice say they cannot make public a classified FBI declaration because it would “adversely affect the ongoing investigation” into Hillary Clinton’s private email server. The recent filing by DOJ attorneys, obtained by LawNewz.com, is significant because it not only acknowledges the ongoing federal probe, but also asserts that if the declaration is made public, it could “reasonably be expected to interfere with enforcement proceedings.”

Enforcement proceedings? Does this mean the FBI has found enforcement to be necessary?

It should be noted that this particular phrase is used in federal law on disclosing public information “compiled for law enforcement purposes,” in tandem with another set criteria – when “the investigation or proceeding involves a possible violation of criminal law.”

(A) the investigation or proceeding involves a possible violation of criminal law; and

(B) there is reason to believe that (i) the subject of the investigation or proceeding is not aware of its pendency, and (ii) disclosure of the existence of the records could reasonably be expected to interfere with enforcement proceedings, the agency may, during only such time as that circumstance continues, treat the records as not subject to the requirements of this section. [Emphasis added]

That’s a far cry from the “security review” Clinton has repeatedly claimed the FBI is undertaking.

Hey Vince (3x), that was a false positive buddy, give me a call.