Apple Music is a new "subscription" music service.  But it has a twist -- when you sign up it will root around your hard drive (and, presumably, any network-attached drives)

This does two things to you immediately: .  . 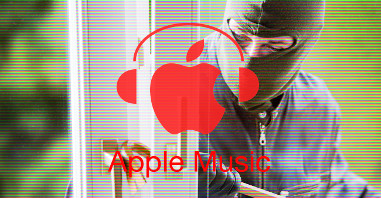 Note that the files it removes  the same and can't be in essentially every case, because MP3s (or other compressed music) aren't the same as WAV or FLAC files and MP3s, even two rips from the same source, are often not bit-identical -- especially if the MP3 encoder used wasn't the same (there are several of them, you see, and they're all slightly different and some can be adjusted to produce different quality results, etc.) Further, WAV and FLAC files are frequently not bit-identical either, because errors happen and they're inaudible to you, but they result in slightly different files.  So "comparing" the files, when it comes to music, is  an inexact science.

No, what happens here is that Apple that it has the "same song", which means either not at all, of different quality, -- and this can (and apparently does) extend to in some cases that's right, music  and own  rights to.

The real "hook", of course, to this is By removing your music -- they try to keep you from canceling your subscription.  The hope, of course, is that you don't have a backup somewhere, or that you won't notice that the files are gone

Then you're stuck as those files may be truly in the case of something you  via digital download.  If it was a CD you can probably rip it again.  Maybe.  You see, CDs  subject to bitrot, and I've had it happen a couple of times where music I  has become unplayable 10 or 20 years hence off the original CD.

Why isn't this sort of thing a felony?  Why is it that a company can come into your home, onto your private property Does a fine-print "license agreement" cover this sort of situation when there's no possible way you gave actual ?

It most-certainly should not, but today it sure appears that it does.

We as a body politic deserve this sort of outrage We permit it by allowing firms that build walled gardens filled with various means of to their cash flow to exist by  paying them money for goods and services.

We're , to put not too fine a point on it, and until we cut that out and start being this sort of ass-reaming is not only what we're going to continue to get,

I have never owned a piece of fruit technology

This sort of outrageous practice, which I remind you in the music realm for Apple with their iPods and "secured" music that  is why.

I'll start feeling sorry for the author of that blog When their stock price is zero and there's a big smoking hole where their balance sheet used to be  I will feel sorry for you.

Until then I have just four words for you:

at 7:05 PM
Email ThisBlogThis!Share to TwitterShare to FacebookShare to Pinterest
Labels: Scitech, Security