We don't know what Bill Clinton did or didn't do in company with Jeffrey Epstein. But we certainly know what Epstein did and, almost as outrageously, what he got away with doing.

Some of the most shocking allegations against Epstein surfaced only after the conclusion of an FBI probe, in civil suits brought by his victims: for example, the claim that three 12-year-old French girls were delivered to him as a birthday present. But the feds did identify roughly 40 young women, most of them underage at the time, who described being lured to Epstein’s Palm Beach home on the pretense of giving a “massage” for money, then pressured into various sex acts, as well as the “Balkan sex slave” Epstein allegedly boasted of purchasing from her family when she was just 14. More recently, a big cash payment from Mail on Sunday coaxed one of Epstein’s main accusers out of anonymity to describe what she claims were her years as a teenage sex toy. This victim, Virginia Roberts, produced a photo of herself with Prince Andrew in 2001 and reported that Epstein paid her $15,000 to meet the prince. Then 17 years old, she claims that she was abused by Epstein and “loaned” to his friends from the age of 15. 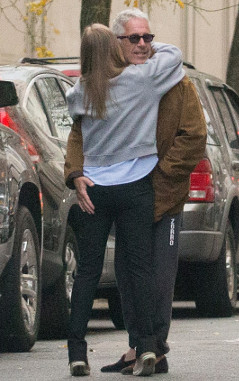 Sex crimes of the kind Roberts alleges took place typically carry a term of 10 to 20 years in federal prison. Yet when all was said and done, Epstein served his scant year-plus-one-month in a private wing of the Palm Beach jail and was granted a 16-hour-per-day free pass to leave the premises for work.

In short, Epstein was never actually in jail. During his “house arrest,” he flew around the country on his jets from his New York City place to his private island. At least one of Epstein's victims claimed to have met Bill Clinton. And it turns out that Bill Clinton was a much more regular passenger on the Lolita Express.

Former President Bill Clinton was a much more frequent flyer on a registered sex offender’s infamous jet than previously reported, with flight logs showing the former president taking at least 26 trips aboard the “Lolita Express” -- even apparently ditching his Secret Service detail for at least five of the flights, according to records obtained by FoxNews.com.

Clinton’s presence aboard Jeffrey Epstein’s Boeing 727 on 11 occasions has been reported, but flight logs show the number is more than double that, and trips between 2001 and 2003 included extended junkets around the world with Epstein and fellow passengers identified on manifests by their initials or first names, including “Tatiana.” The tricked-out jet earned its Nabakov-inspired nickname because it was reportedly outfitted with a bed where passengers had group sex with young girls.

It doesn't help that the Democratic establishment seems to have played a role in getting Epstein a pass on child rape, that Bill Clinton already had rape accusations in his past or that the Clintons had become notorious for their willingness to do favors for criminals in exchange for money.

Either way we've come a long way from Gary Hart being bounced for "Monkey Business" to Bill Clinton flying around on a child rapist's plane without anyone in the media seeming to care much about it.

Social conservatives often get a bad rap. But there really is no limit to how low standards can fall when any trace of a moral code vanishes out the window. What did Bill Clinton actually do? Who knows. More importantly these days, who cares.

And, of course, that is just the same as taking 20+ flights around the world with him. Great catch, Ron.