As President Obama’s second term nears its end he has begun a media tour emphasizing what he claims are the positive aspects of his policies. The complicit media, of course, have long worked to inflate positive impressions of Obama’s legacy, and this latest set of interviews is no different.

“In two recent interviews, with The New York Times Magazine on his economic legacy and with The Atlantic on his foreign policy legacy, Mr. Obama expressed a common sentiment: He had achieved big things and avoided even bigger mistakes, and yet most people just shrug,” wrote Mark Landler for The New York Times on April 28.

Landler writes that this may be because Obama describes his successes as negatives, that “without the steps he took—or didn’t take…things would have turned out so much worse.”

Saying that things could have been worse without Obama’s policy interventions is an argument based on counterfactual reasoning, as if the President could somehow know the future that he avoided. 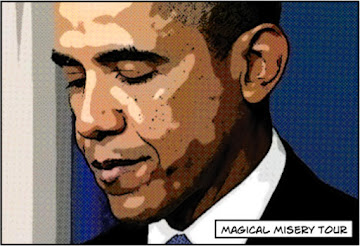 “‘How people feel about the economy’…is influenced by ‘what they hear,’” President Obama told the Times in Andrew Ross Sorkin’s April 28 lengthy feature touting Obama’s economic legacy. President Obama then went on to blame Republicans for constantly telling their base that the nation’s economy has not improved.

But even the Times had to admit in that article that average family incomes are “$4,000 less than…when Bill Clinton left office,” and that the nation faces growing economic inequality.

“The private sector has added jobs for 73 consecutive months—some 14.4 million new jobs in all—the longest period of sustained job growth on record,” writes Sorkin for The Times. “Unemployment, which peaked at 10 percent the year Obama took office, the highest it had been since 1983, under Ronald Reagan, is now 5 percent, lower than when Reagan left office.”

As we have cited, the labor participation rate is currently under 63 percent—the same as it was in the 1970s. A low unemployment rate means little if Americans are no longer searching for work in the first place. And that is the main factor driving the unemployment rate down. The rate of unemployment alone does not tell the true story. Not even close.

As an example, last Friday the Bureau of Labor Statistics issued their monthly numbers, and said that 1.7 million people “wanted and were available for work, and had looked for a job sometime in the prior 12 months. They were not counted as unemployed because they had not searched for work in the 4 weeks preceding the survey.” The same press release said that there were six million people working as “involuntary part-time workers” because they couldn’t find full time jobs. Yet the administration, and its friends in the media, want you to look at that five percent unemployment figure and assume that the economy is doing well.

President Obama has been trying to sell this same economic story time and again, claiming that he saved the country from sure destruction and that the economy has recovered under his watch. Like so many of his legacy issues, Obama is trying to sell a set of false goods with positive spin—and the media are buying it.

The last quarter showed virtually no growth in the economy. Obama is the first president to have never had a single year of his term in office with at least three percent growth in GDP. The average annual rate of growth in his two terms in office is 1.7 percent. We’ve added nearly $10 trillion to the national debt, and it is still growing. When he was first running for president, Obama said that under President Bush, we had added $4 trillion to the national debt, and that it was “irresponsible” and “unpatriotic.” So what is adding nearly $10 trillion? Still Bush’s fault?

The Times also described Obamacare as President Obama’s “boldest piece of legislation and the one that will most likely define him.” As we recently reported, Obamacare is an imploding boondoggle characterized by rising premiums and lack of care. And it was sold based on a series of lies, as revealed by an Obama adviser, Jonathan Gruber, who was also called the architect of Obamacare by some. Gruber said that the administration relied on the “stupidity of the American voter.”

While the media continue to look the other way concerning Obama’s failures, President Obama recently told the press that their “power and…responsibility to dig, and to question, and to counter distortions and untruths is more important than ever.”

The irony is thick. The media have the power to dig and uncover the truths about Obama’s many scandals, but they are regularly derelict in that duty. Instead, they continue to publish glowing prose celebrating the historic nature of his presidency. This despite his ongoing war on journalists, as well as his utter lack of transparency.

“Obama did not just want to be president. His mission was to leave a legacy as a president of consequence, the liberal counter to Reagan,” wrote David Maraniss on April 22 for The Washington Post. “It is now becoming increasingly possible to argue that he has neared his goal.”

Maraniss cites as successes the President’s policies on Obamacare, the disastrous Iranian nuclear deal, the stimulus, and efforts on global warming—to name just a few. These “liberal achievements have added up, however one judges the policies,” Maraniss argues.

The Iran deal will not prevent that totalitarian regime from gaining nuclear weapons. Instead, Obama’s deal virtually guarantees a nuclear Iran and a Middle East arms race.

A May 5 article in The New York Times profiles Ben Rhodes, President Obama’s deputy national security adviser, who, according to the article, “mind melds” with Obama. The article, by David Samuels, calls him Obama’s “foreign policy guru.” Yet Rhodes admits in the article that the Obama administration deliberately sold the Iran deal to the American public using a network of media people for whom Rhodes had nothing but contempt, based on a false premise, because they felt they had to. The narrative they spun was that they waited until Iran elected a more moderate president—Rouhani to replace Ahmadinejad—before getting serious about negotiating the deal. But that was not in fact the case.

As Samuels put it, “the story of the Iran deal presented…was largely manufactured for the purpose for [sic] selling the deal.” On top of that, Samuels, still refers to the “signing” of the Iran deal, when in fact nothing was signed, and the administration has acknowledged that in a letter from the State Department. The deal doesn’t exist, except in the narrative the Obama administration pushes. The Iranian actions clearly indicate they don’t feel the need to abide by any restrictions. In fact they take every opportunity to attempt to humiliate Obama and America in general, whether by capturing Navy vessels and holding our men at gunpoint, or testing ballistic missiles in violation of a UN resolution, or buying weapons that are supposed to be blocked off to them.

Each entry in Maraniss’ list of Obama successes is based on ineffectual governance that will leave the world less safe or less prosperous than before. In some cases, these policies contribute to a series of Obama scandals the mainstream media assiduously continue to ignore in their desperation to manufacture successes for President Obama.

Maraniss, in particular, continues to devote himself to the historic nature of President Obama’s leadership, blaming some opposition to Obama as racist. “The fact that Obama was the first black president, and that his family was the first African American first family, provides him with an uncontested hold on history,” writes Maraniss. “Even as some of the political rhetoric this year longs for a past America, the odds are greater that as the century progresses, no matter what happens in the 2016 election, Obama will be seen as the pioneer who broke an archaic and distant 220-year period of white male dominance.”

President Obama is guaranteed to be celebrated as the first black president in the history books. However, any fair accounting will need to cover the disaster that is the Iran deal, and Obama’s unilateral quest to complete the transformation of America at any cost. And there is a list of scandals that the media have refused to identify as such. President Obama is not a liberal Ronald Reagan; Reagan succeeded at what he put his mind to. President Obama has simply left in his wake a series of broken promises and disasters. Maybe that’s what he intended all along.

By Accuracy In Media.