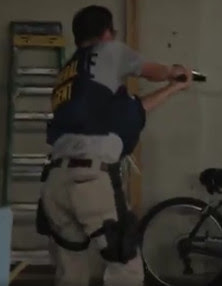 While Wall Street has had its generous Federal Reserve sponsor for the past 8 years, literally printing money out of thin air, showering banks with risk-free profits and making the rich richer beyond their wildest dreams (although ever since the end of QE the pump has run dry), the rest of the US population was largely left to fend for itself. In the process, just as Wall Street demonstrated unprecedented creativity to come up with fraud that will make one's head spin (if never lead to an actual prison sentence), so did the "99%", the only difference being, of course, that for the mere mortals jail time is an all too certain outcome as are dramatic police raids.

This is the story of one such extremely creative if abhorrent crime, and raid, involving what may have been the biggest food-stamp crime ring bust in history.

As CSP reports, in Operation Stampede, what is being called the largest food-stamp trafficking takedown in history in terms of financial loss, law enforcement agencies filed federal charges last week against 22 Florida store owners or operators, including one convenience-store owner, in connection with schemes to illegally redeem food-stamp benefits for cash. Allegedly, the defendants fraudulently obtained more than $13 million dollars in EBT deposits for transactions in which the stores did not provide food.

According to the indictments, the defendants or their co-conspirators or employees swiped the recipient’s EBT card at a point-of-sale (POS) machine for an inflated amount and paid the recipient, in cash, a reduced percentage of the value of food-stamp benefits charged on the card. The defendants would realize a guaranteed, significant profit from each fraudulent transaction. In most situations, the recipient did not actually receive any food or eligible items in return for their food-stamp benefits.

In addition to the federal indictments, the Office of Statewide Prosecution charged six individuals for their alleged receipt of additional illegal payments during the course of their participation in fraudulent food-stamp schemes.

While most of the business are best classified as food stands, produce stands and “flea-market” retailers, one—ABC Food Market in Miami—is a convenience store owned by Zulfiqar Mithavayani. Since March 2013, Mithavayani and associate Jamal Al-Hawa allegedly redeemed and caused to be redeemed more than $1.1 million in EBT food-stamp benefits, more than $1 million more than the average convenience store in Florida during this period, according to the indictment.

The Supplemental Nutrition Assistance Program (SNAP), formerly known as the Food Stamp Program, is a federally funded, national program established by the United States government to alleviate hunger and malnutrition among lower income families. The United States Department of Agriculture (USDA) administers SNAP through its agency, the Food and Nutrition Service (FNS). FNS is responsible for the authorization and disqualification of retail food establishments participating in the redemption of SNAP benefits.

In this case, and in many others like it which have not been quite as prominent, the foodstamp program also led to criminal abuse of taxpayer funds. What is more troubling is that $13 million is an amount most financial professionals would barely sneeze at. While we applaud the law enforcement involved in this crackdown, we only wish regulators and enforcers demonstrated the same zeal when breaking up criminal cartels which have led to criminal gains that are orders of magnitude greater than the amount under consideration in this particular bust.

Below is a video clip of the historic bust.

I like the way them Quakers gots their wimmin folk and the funny boys under control.

Why is it that these "Quakers" have Islamic names?

Most apparently have hispanic surnames with the exception of two names which appear to be middle eastern arabic, Zulfiqar Mithavayani and Jamal Al-Hawa.

Quakers? Why the coverup?