I am afraid that grim reality requires choosing the second of David Pryce-Jones’s two ways of looking at London’s election of Sadiq Khan as mayor: By choosing an enabler of Muslim extremism, the British are losing control of their destiny.

In the run-up to the mayoral election, the invaluable Daniel Johnson, editor of Standpoint, provided the essential backdrop:

Indeed, what has emerged before our eyes in Britain is a kind of Islamist state within a state…. A new survey by ICM with the former head of the Equality and Human Rights Commission, Trevor Phillips, for Channel Four and the Sunday Times confirms that Salafists are fast becoming the dominant influence on British Islam. Nearly a quarter (23 per cent) of a sample of 1,081 adult Muslims want to see “areas of Britain in which sharia law is introduced instead of British law”. Nearly a third (31 per cent) of them think “it is acceptable for a British Muslim to keep more than one wife”, even though polygamy is in theory punishable by up to five years imprisonment. Wives should “always obey their husbands”, according to 39 per cent; the survey did not ask about the Koran’s injunction to husbands to “chastise” their wives, but Trevor Phillips sees it as “a clear invitation to legitimise domestic violence”. About 5 per cent of British Muslims sympathise with stoning adulterers. That may seem a small percentage, but only 66 per cent completely condemn such executions. This suggests that about a third would go along with such punishments under certain circumstances. 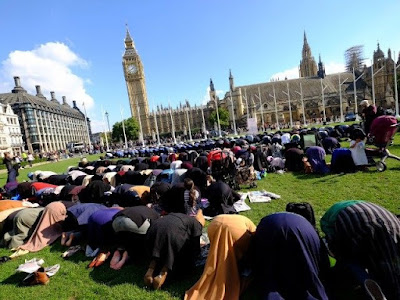 The most striking of all the ICM statistics concern homosexuality. Only 18 per cent of Muslims think it should be legal in Britain, while more than half (52 per cent) would ban it. Up to half of the latter group, it is fair to assume, also support sharia law, which prescribes the death penalty for homosexuality. If most British Muslims hold such hostile attitudes towards same-sex attraction, it is not surprising that – to take one example – a recent gay participant on the TV reality show First Dates explained how he had been beaten up by other Muslims so badly that he was in hospital for months….

… Like many other Londoners, I have Muslim friends and neighbours who have embraced Western values. Often, they have married non-Muslims. But that makes them untypical: fewer than 10 per cent of Muslims live in mixed relationships and just 3 per cent of Muslim children grow up in mixed households. While more than half of Muslims do mix with non-Muslims at work or in college, friendships do not always result: a fifth of them never enter a non-Muslim home. Many have hostile attitudes to non-Muslims. A Pew survey in 2006, for example, found that 47 per cent of British Muslims held unfavourable views of Jews; unfortunately, the ICM poll shows that up to 44 per cent are still anti-Semitic…. The ICM poll shows that eight out of 10 Muslims here do feel British. But with mass immigration from more illiberal Muslim cultures, higher birthrates in more segregated communities and a growing number of non-Muslims who are converted to Salafism, liberal Muslims are a shrinking minority.

Here in London, which is home to about a third of British Muslims (including thousands of migrants who live below the radar of the authorities), we have already seen the assertion of power by political Islam. The takeover of Tower Hamlets by a corrupt Islamist politician, Lutfur Rahman, may be a harbinger of things to come. Last year he was removed from office by special commissioners, but for five years Rahman and his cronies ran a borough of nearly 300,000 people, distributing a budget of more than £1 billion. It is worth noting that after being ousted from the Labour Party, he was able to replace it with a notionally “independent” but in practice sectarian group, even though Muslims officially make up only a third of the population. The Muslim “block vote” is such a formidable electoral force that for Islamists to dominate a city it does not need to have a Muslim majority.

The Islamist voting pattern clearly vaulted Sadiq Khan. Johnson notes that the Muslim vote is crucial to Labour because, for example, “[a]t least ten London boroughs have large, mainly conservative Muslim communities, where children grow up in an Islamic monoculture and women are covered or veiled.”

Khan is an admirer of Sheikh Yusuf al-Qaradawi, the highly influential Muslim Brotherhood sharia jurist who backs Hamas’s jihad against Israel, supported violent jihad against American troops in Iraq, and has promised that Islamists “will conquer Europe, we will conquer America! Not through the sword but through dawa!” (Dawa is fundamentalist Islam’s aggressive form of proselytism.) (Qaradawi figures prominently in two of my books, The Grand Jihad and Spring Fever, my Broadside pamphlet Islam and Free Speech, and I’ve profiled him a number of columns, see, e.g., here. The Investigative Project outlines a number of his more memorable quotes, here.)

As I’ve previously detailed, Qaradawi is a leading force behind the “voluntary apartheid” scheme that exhorts Muslims to “integrate but don’t assimilate” in the West. The objective is to set up enclaves in which Muslims, once achieving a critical mass, pressure the home government to allow them to govern their affairs in accordance with sharia. That brings us back to Daniel Johnson:

We now know that in the past Sadiq Khan, who as a left-wing human rights solicitor represented Muslim extremists, was happy to make compromises with the Salafist attitudes that prevail in many London mosques. In 2004, he supported incorporating sharia law into the British legal system: “There are some . . . uncontroversial areas of Islamic law which could easily be applied to the legal system . . . in the UK.” What Khan had in mind by “uncontroversial” was the legitimisation of polygamy, by altering inheritance tax law to allow husbands to divide their estates between several wives while enjoying the tax exemption normally applicable to a single spouse. He called this “applying common sense”, but it was yet another step towards de facto recognition of polygamy by the law. Muslims have long been claiming welfare benefits for multiple wives; the only condition is that they must have married them abroad.

In 2007, Khan questioned the need for the criminal law to be used to stop forced marriages, claiming that such “ghetto” legislation would stereotype Muslims. Of course, he glossed over the fact that forced marriage was almost exclusively a Muslim problem in Britain. It is hard to avoid the conclusion that Khan is a typical left-wing cultural relativist – and they are a big part of London’s problem. Despite having made his career as a human rights lawyer, Khan has never challenged the conspiracy of silence about certain offences – such as forced marriage and abduction, female gentile mutilation and “honour crimes” – that are committed mainly by Salafist and other fundamentalist Muslims on a huge scale, yet are rarely or never prosecuted in Britain. Nor did he expose grooming by Muslim gangs.

Under Mayor Khan, London will undoubtedly deserve more than ever the ironical nickname it earned a decade ago among European intelligence services: “Londonistan”. It is hard to imagine Khan taking the tough measures to root out Isis cells hidden inside Muslim ghettos that have been forced on French and Belgian police forces since the attacks on Paris and Brussels. Even in the aftermath of a similar attack on London, it is inconceivable that Khan would risk the accusation that he had turned his back on his Muslim heritage. His opinions change according to need; his allegiance doesn’t.

A version of this piece also appeared on National Review Online.