At a recent Democrat presidential debate, Vermont Senator Bernie Sanders said we “should look to countries like Denmark…and learn from what they have accomplished for their working people.” The good senator should either rephrase his statement, or look more closely at the data. Democratic-socialism may work in some places in Europe, but was never intended, nor can it work, in the United States of America.

Another of Sanders’ erroneous statements regarding Denmark was when he claimed that Denmark’s economic model “provides extraordinary security and opportunity.” It does provide security, but little opportunity, economic or otherwise.

Democratic socialism is a political ideology which juxtaposes a democratic political system, (popular elections), with a socialist economic system. As such, it involves a combination of political democracy (usually multi-party democracy) with “social ownership of the means of production.” Consequently, it can be somewhat characterized as a less tyrannical and totalitarian form of socialism, since the masses are voting for the cadre that will separate them from the fruits of their labors. And while it may not abolish private property ownership, as its more draconian sibling, communism does, it taxes income, and inflates prices sufficiently, that private property ownership is severely regulated. 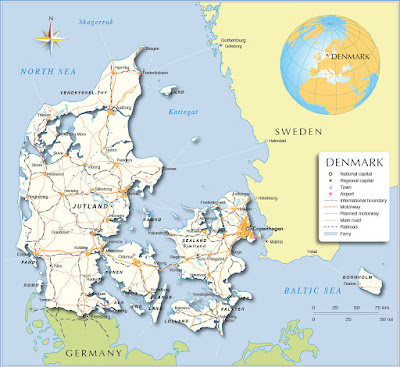 The sheer economies of scale make a comparison between the Scandinavian country and the U.S. impracticable. Denmark, with a landmass of 16,562 square miles, is roughly the size of Maryland, and with a population of 5.6 million, has about 1.5% of the U.S. population. Compound that with America’s propensity toward a kakistocracy, as evidenced by the last two presidential election cycles, and democratic-socialism would likely destroy the economy, and the republic.

Danish author, Mikkel Clair Nissen, has published his own response to Americans who think Denmark’s democratic-socialism is so appealing. “I am a school teacher from Denmark making about $61,000 a year. We get free education. You don’t have to pay for the doctor, the hospital, and students even get paid to study. It all sounds so great…right? However, I forgot to mention that nothing is ever free. The lowest personal income tax in Denmark is minimum 40 percent. Also, we pay a sales tax of 25 percent, and on top of sales tax the government applies further (generally hidden) duties and fees, applied to almost everything, making it really hard for lower class people to get by, causing them to be deeply dependent on government handouts,” she says.

When Senator Sanders refers to “working people,” he likely is referring to the middle class, since that’s the most productive and economically viable demographic. Just as most of the fiscal initiatives of the past seven years have most adversely affected the American middle class, European democratic-socialism virtually plunders theirs. The middle-class in Denmark is taxed at a 60% rate, and that’s just the income tax rate. Yet to pay that rate, all one has to make is $55,000 per year. That means those who, by American standards, are earning a respectable middle-class income of $55k per year, only keep $22,000 of their earnings. That’s a relatively paltry $1,833 per month.

Nissen continues, “A gallon of gas is about 10 dollars. Tax on a car is 180 percent, which brings a car valued a bit over $20,000 dollars in the United States (e.g. Honda Accord) up to an astounding $50,000 dollars in Denmark.” No wonder 65% of the travel in the country is by mass transit and bicycle. And not surprisingly, cost of energy is extremely expensive, as most electricity is produced by “green” sources. The cost per kilowatt-hour of electricity is $.42, compared with an average of $.12 in the United States.

Nissen further explains, because of “excessive taxation, Danes also have the highest private debt in the world. Only few will ever own a car or a house here; banks generally do – hypocritically, the very same banks that the collectivists despise. Anyone who makes over $80,000 annually pays a personal tax of 68 percent. This means that almost all people with higher earnings have either found ways to evade taxes, or have left the country, often bringing their companies with them, making employment scarcely low.”

And Nissen provides more insights. “Denmark’s suicide rate has averaged 20.8 per 100,000 during the last five decades, with its highest level of 32. The American suicide rate averaged only 11.1 during the last five decades, and has never exceeded 12.7. Danes are deeply deprived, driven by severe narcissism, and so more than 11 percent of adult Danes – the supposed happiest people in the world – are on antidepressants. Well, of course, Danes are happy; they are medicated to be!”

If Danes are so happy to be economically socialized, why do they take their own lives at three times the American rate, and their anti-depressant dependency exceed America’s by 40%? Could it be that the cost of freedom is much greater than we assume?

Nissen concludes his missive, “Everyone wants the American dream. In Denmark’s neo-communism, no one will ever own or accomplish anything.”

America was founded on classical-liberal ideals of maximum freedom to facilitate virtually unlimited potential. Benjamin Franklin said, “Those who would give up essential Liberty, to purchase a little temporary Safety, deserve neither Liberty nor safety.” And that’s precisely what socialism, in all its iterations, does. It sacrifices individual freedom at the altar of security and egalitarianism

One of the most critical concepts of liberty upon which America was founded, is economic freedom. Indeed, Thomas Jefferson and Alexander Hamilton championed economic freedom as the foundation for all other liberties. True liberty mandates that private property, and the ability to reap and freely expend the fruits of our labors, is sacrosanct. Nobel economic laureate Milton Friedman declared that property rights are “the most basic of human rights and an essential foundation for other human rights.” Without economic freedom, all else is severely vitiated.

There might be some things America can learn from the Danish economic model, but only if we deny what America was founded and intended to be — the land of the free, dedicated to life, liberty, and the pursuit of happiness.

Barry is feinting with one hand while undermining our Country with the other. I did not realize the treachery with which he is treating Russia and China. I'm amazed he didn't invite Grand Fenwick to dinner with the Danes.