HUD'S DIABOLICAL NEW REGULATION: "Fair housing" will turn every city into the south side of Chicago

By Sen. Mike Lee. This article was originally published at NetRightDaily.com and is adapted from Senate floor remarks on May 18, 2016.

Mr. President, in a piece of legislation of this size, there is always much to praise — and, unfortunately, even more to criticize.

I rise today, specifically, to correct one major mistake in this bill. As currently written, it permits the Department of Housing and Urban Development to proceed in the implementation of its radical new regulation, the insultingly misnamed “Affirmatively Furthering Fair Housing Rule,” or AFFH.

The original intent of the Fair Housing Act was to protect the God-given right of individuals and families — no matter their skin color or ethnicity — to buy and rent homes where they please.

Proponents of AFFH, including President Obama, claim that it fulfills the original purpose and promise of the Fair Housing Act of 1968.

But the truth is, HUD’s new housing rule isn’t the fulfillment — but a betrayal — of the Fair Housing Act of 1968. 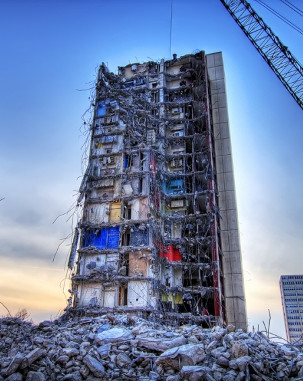 The original intent of the Fair Housing Act was to protect the God-given right of individuals and families — no matter their skin color or ethnicity — to buy and rent homes where they please. By contrast, the explicit purpose of HUD’s new rule is to empower federal bureaucrats to dictate where a community’s low-income residents will live.

This is not what “progress” looks like, Mr. President.

AFFH not only grants unprecedented new powers to HUD that were not contemplated by — and have no legitimate basis in — the Fair Housing Act of 1968, but it will ultimately hurt the very people it purports to help: public-housing residents — especially African-American public-housing residents — who too often find themselves trapped in dysfunctional, broken neighborhoods.

To make matters worse, this new rule will end America’s unique — and uniquely successful — commitment to localism and diversity, and make neighborhood-level construction decisions subject to the whims of future presidents.

If this past year has not yet done enough to give you pause about handing over such power to the Executive Branch, you’re not paying close enough attention.

So I’m offering an amendment today — number 3897 — that would prohibit HUD from using any federal taxpayer money to carry out the Affirmatively Furthering Fair Housing Rule.

The House of Representatives has already passed this amendment — twice — and will likely to do so again in the near future. We should follow the House’s lead.

Here’s how the rule works.

AFFH requires cities and towns across the country to audit their local housing policies, under close supervision by HUD regulators, who may have never have lived anywhere near there.

Critics of AFFH often say — as I have said — that this rule turns HUD into a National Zoning Board with the power to unilaterally rewrite local zoning laws and land-use regulations in every city and town in America.

But that’s not quite how the rule works, and it’s why Senator Collins’ amendment would not do anything to prevent the implementation of AFFH.

In the 10 months since the rule was finalized, it has become clear that the mechanics of AFFH are much more underhanded and subversive than critics have often claimed.

Under the new rule, HUD doesn’t replace local Public Housing Authorities — it conscripts them into its service.

Mr. President, this gets to the heart of the difference between my amendment and the amendment offered by my colleague, Senator Collins.

The danger of AFFH is not that HUD will direct local governments and public housing authorities to make specific changes to their zoning policies. It will just threaten them, by tying obedience to federal Community Development Block Grants.

CDBG is a federal-grant program controlled by HUD that allocates $3 billion per year to local governments to help them address a variety of community-development needs, including providing adequate and affordable public housing.

Traditionally, local officials have been free to use their CDBG grant money according to their community’s needs and priorities. But under AFFH, HUD officials will withhold a local government’s CDBG funds unless that local government adopts HUD’s preferred housing policies.

Predictably, proponents of the rule claim that this will be a collaborative process, with local-government officials in the driver’s seat while the bureaucrats at HUD merely provide “support” and “guidance.” But the 10-month track record of AFFH suggests that the opposite will be true.

In fact, I have already heard from the Housing Authority of Salt Lake County predicting that the costs of complying with AFFH will stretch their already-thin resources, add hundreds of hours of bureaucratic paperwork to their workloads, and eliminate their autonomy to determine the best ways to provide adequate low-cost housing to their community.

Mr. President, the problem with HUD’s new rule has nothing to do with the intentions behind it.

In a press release announcing the finalization of AFFH, HUD Secretary Julian Castro said: “Unfortunately, too many Americans find their dreams limited by where they come from, and a ZIP code should never determine a child’s future.”

There’s no disputing that the neighborhood in which a child grows up affects his educational, social, and professional outcomes in the future. Nor is there any disagreement that far too many children today are raised in dysfunctional neighborhoods because it’s the only place their parents can find affordable housing.

The lack of affordable housing is not a new problem in America — just ask anyone who has ever had to pay rent in one the major metropolitan areas controlled by the Democratic Party. But neither is the solution.

The best way to make housing more affordable is to allow more housing to be built. And the best way to help low-income citizens find fair and affordable housing is to empower them to live in a neighborhood that meets their needs.

The history of Chicago is instructive here.

In the 2000s, Chicago’s city government demolished many of its public-housing facilities without a plan to replace them.

Those with the resources and wherewithal to choose where to live moved to places where housing is cheap and economic opportunity is plentiful. But the less fortunate were relocated to more remote, less prosperous towns, like Dubuque, Iowa, at the behest of — who else — the Department of Housing and Urban Development.

In 2008, the city of Dubuque was struggling to meet the needs of its own public-housing residents. Yet in stepped HUD, declaring that the city’s housing policies would fail to meet the agency’s fair-housing standards — and that, therefore, the city would be ineligible to receive federal funding from HUD — unless the local government actively recruited Section 8 voucher holders from Chicago.

Unwilling to lose access to federal funding on which the city had come to rely, the small Iowan town acquiesced to HUD’s demands.

This imposed an enormous administrative burden on the city’s resource-strapped housing agencies, but HUD’s real victims were Chicago’s public-housing residents who were forcibly displaced to an unknown town 200 miles from the city they used to call home.

Mr. President, unless we pass this amendment to defund the disastrously misguided AFFH rule, this is what the future of public housing in America will look like.

I urge my colleagues to join me in supporting this amendment and reaffirming that low-income families are not statistics to be managed by distant bureaucrats — they’re human beings, our neighbors in need, who deserve to be treated with dignity and respect.

This is assuming that someone relocated to a predominantly white community would want to stay there.