As expected, the left laid it on thick Monday at a federal trial on Wisconsin’s voter identification law.

Contrary to actual experiences on the ground during last month’s full-scale rollout of the law, an attorney for two liberal groups described voter ID as “torturous” for college students and minorities.

“They’re an embarrassment and a stain on the history of the state,” attorney Josh Kaul said of the changes in state law.

The law itself and Wisconsin taxpayers have been tortured by a spate of left-wing lawsuits that go on and on despite the U.S. Supreme Court’s rejection last year of a challenge to the 2011 law requiring voters show photo ID in order to cast election ballots.

Assistant state Attorney General Clay Kawski, who is defending the state from yet another lawsuit, said voter ID opponents have thrown in everything but the kitchen sink in trying to kill the law. He called it a “scattershot approach,” according to the Associated Press. 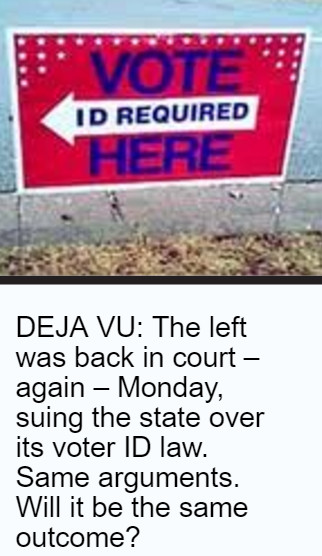 In their latest lawsuit, the left’s attorney dragged out a Todd Allbaugh, who served as chief of staff for former state Sen. Dale Schultz. Schultz, a Richland Center Republican, was seen as a turncoat by many conservatives for voting against key government reform measures.

Allbaugh, who grew increasingly bitter about the treatment of his long-time boss (he once complained to Wisconsin Watchdog about Schultz losing out on choice committee assignments to the new-guard conservatives), testified that some Republicans were “giddy” during a 2011 closed-door meeting about the voter ID bill. Allbaugh insists some Republicans pushed the proposal to put obstacles in front of some voters who typically vote for Democrats.

But as state Rep. Joe Sanfelippo put it, facts are stubborn things.

The New Berlin Republican said the intent of the bill was simple, “make it easy to vote but hard to cheat.”

“That’s exactly what we witnessed in the spring election,” Sanfelippo told Wisconsin Watchdog Monday on “Madison in the Morning,” on NewsTalk 1310 WIBA.

Since July 2011, Kawsi said the state has issued 420,000 free ID cards, with just 52 people being denied through the petition process, AP reported.

“If there were no lines whatsoever and you walked right in and voted and the number of votes was actually lower this time around than in previous elections, the same people grumbling about the long lines would be complaining that there were no lines and no one showed up to vote because of voter ID,” Sanfelippo said. “They argue the same thing on both sides of the issue.”

The League of Women Voters of Wisconsin, which previously sued the state over the law, conceded things went fairly smoothly at the polls. “While the majority of voters did not have problems with same-day registration, producing an acceptable ID to vote, or completing the ballot, there were some noteworthy exceptions,” the league said in a recently released report.

Bob Spindell, a member of the Milwaukee Election Commission , discussed those “exceptions” last month. He said he spoke to about 60 election chiefs on election night.

“I asked, ‘What about voter ID? How did it work?’ Without exception, every chief said there was no problems with voter ID,” Spindell said in testimony before the Government Accountability Board.

He estimated 10 or 12 voters refused to show their photo IDs at the polling stations in questions. When they were told about the law, that they must show an ID or they wouldn’t be able to vote, they complied with the law. Spindell estimated that approximately 10 would-be voters said they left their photo IDs at home. Some went home and returned with identification, some didn’t.

In the city of Milwaukee, Spindell said there were eight provisional ballots provided to individuals who did not have proper ID. Those individuals are allowed to cast a temporary ballot which is recorded when they return with a valid photo ID.

That’s eight out of 160,000-plus votes cast in Milwaukee, Spindell said.

And yet the law, according to the litigants in the latest lawsuit, is “torturous” and disenfranchising.

Andrea Kaminski, executive director of the League of Women Voters of Wisconsin , told the GAB the organization trained “approximately 100 observers and placed them at polling sites in cities around the state. Preliminary figures from a League report expected to be released in a couple of weeks, “demonstrate an urgent need for vigorous voter education and training of election workers” before the November election, Kaminski said.

She noted that 322 people were “not allowed to register to vote in 175 polling places” while the observers were present. Of those, 183 people were turned away because they did not have acceptable proof of residence, and 24 individuals did not meet the 28-day state residency requirement, she said.

Then Kaminski summed up what the left feels is a failure, and voter ID advocates believe is the success of Wisconsin’s strengthened voter integrity laws.

“Many of these people would have been able to register to vote under the less restrictive laws a few years ago,” she said.

Is that because those would-be voters were not eligible to vote in that district or in that election? Was it because some of them may have been trying to illegally vote? Kaminski didn’t say.

Did the voter ID law in these cases do what is was created to do? Did it stop ineligible voters? Voter fraud?

The left-wing parade of lawsuits rolls on.

In 2014, the U.S. Court of Appeals for the 7th Circuit upheld the law. Last month, after endless arguments from liberal groups, the court asked a federal court judge to review claims that some voters should be entitled to relief because they face obstacles to obtaining an ID.

This, after the U.S. Supreme Court last year refused to review the 7th Circuit’s 2014 ruling, granting another victory for voter ID supporters.

Laws requiring identification to vote have been implemented in several states, and they have repeatedly been upheld. The latest in North Carolina, where a federal court judge upheld a provision ending same-day registration. North Carolina is a photo ID state.

“The judge’s opinion also trimmed the early-voting period by seven days and OK’d the repeal of a provision that allowed ballots case outside a voter’s home precinct to count,” CNN reported.

The plaintiffs in Wisconsin’s lawsuit are challenging many of the same changes in the law.