This is another classic example of Islamic “fauxtography” (Ed.: also known as Pallywood). The picture is so obviously staged that I feel embarrassed for the photo editor who selected it. To imagine that a toddler could be pulled out of the wreckage alive is fanciful enough but, okay, miracles do happen.

But look again. How could the grimy “rescue worker” possibly have dug the baby out of the rubble. The kid doesn’t have a spot on his clean white tee shirt and socks. And don’t tell me that the dust on the rescue worker is light colored and wouldn’t show, I’ve raised six kids and I know that a white tee shirt shows everything! That kid’s mother must have known he would be starring in the latest promo shots for the Jihad and put him in a brand new outfit. Anyway, the child’s pants are dark blue and nothing shows there either. 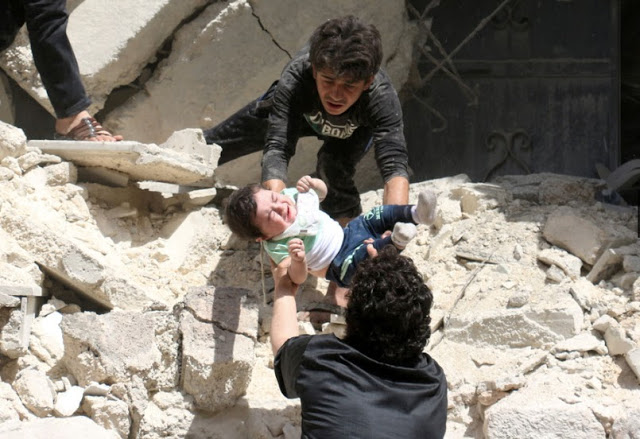 That’s without even asking, "how could he have escaped being trapped by all that falling masonry with nary a nick or cut on his big, round, pink head? 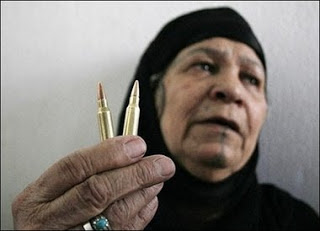 The truth is, there is a well documented and very sad history of this kind of “journalism” albeit most has been directed at vilifying Israel and the US. Pallywood and fauxtography have a long history. I’ve written about it before by PBS here .  Perhaps the most infamous example was the filming of the non-death of Mohammed al Durah that was exploited to touch off the emotional reaction that fed into the first intefada. It includes some of the most pathetic ruses ever swallowed by a media hungry for images and emotions. My favorite (I wrote about it here) was the Iraqi woman who was photographed during the battle for Sadr City holding up two bullets that she claimed an American soldier fired at her home. Unfortunately for her, and the media stooges who reprinted the picture, the bullets she brandished were live rounds, still shiny and unfired in there brass cartridges. So what did he do, lady, throw them at you?

The whole thing would be funny were it not so dangerous. Western media pipeline this stuff all the time - right from the cesspools of Jihadi propaganda to the living rooms of The West- no filter at all. Until stuff like this gets identified and ridiculed, it will keep on twisting the public debate and anesthetizing the survival instincts of our culture.

If you had no other clue to the falsity of the picture of the "rescue", all you had to do was look at its provenance. Agence France, by way of a Jihadi photographer- Just like much of the propaganda from the middle east (including the al Durah affair by Charles Enderlin), funneled through French media by Arab/Islamic photographerss on the ground... Oh, by the way, the bullet lady came by way of Agence France too.

Read more at Breath of the Beast.