Thank you, sir, for the clarification. Up until now, I had believed Barack Obama; that Islamic terrorism was caused by climate change.

Petraeus' premise is that "inflammatory political discourse...against Muslims and Islam...including proposals from various quarters for blanket discrimination against people on the basis of their religion... will compound the already grave terrorist danger to our citizens... directly undermine our ability to defeat Islamist extremists by alienating and undermining the allies whose help we most need to win this fight: namely, Muslims." 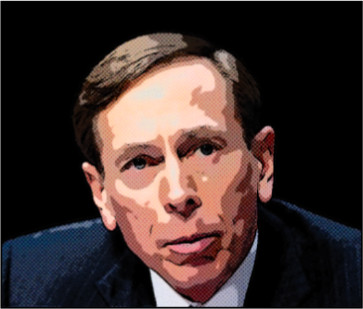 Let us first dispel a universal myth and the fundamental flaw in Petraeus' argument. There is no such thing as gratitude in foreign policy; only interests.

In every one of the "alliance" cases Petraeus cites: Sunni Muslims in al Anbar province, the Iraqi Shiite government, the Afghan Northern Alliance, the nation of Indonesia - all of them worked with the United States because of mutual interest, not happy talk.

NATO exists and operates on the basis of mutual interest and even after a decade of vitriol and their mutually exclusive ideologies, Hitler and Stalin still concluded the 1939 Nazi-Soviet Pact.

Petraeus is concerned that political rhetoric will inhibit our ability to root out entrenched terrorist, like in Libya, which would not have become entrenched with terrorists except for the foreign policy malpractice of the Obama Administration and CIA Director Petraeus, arguably compounding "the already grave terrorist danger to our citizens."

The Islamic State, ISIS, has made no secret of its intention to infiltrate Europe and the United States through "refugee" migration or other means for the purpose of carrying out terrorist acts.

In his Congressional testimony, FBI Director James Comey admitted that there is no way to screen the tens of thousands of Muslim refugees the Obama administration plans to accept into the US.

Yet Petraeus considers any effort to halt uncontrolled Muslim immigration as "blanket discrimination against people on the basis of their religion," "demonizing a religious faith" or "toying with anti-Muslim bigotry."

Petraeus employs all the familiar false propositions made popular by Democrat Party operatives, the liberal media, and, more recently, by the Republican establishment as a not-so-well-disguised repudiation of potential courses of action outlined by Donald Trump.

It reads less like a valuable contribution to the foreign policy literature than a left-wing academic polemic or an audition for a cabinet position in the Administration of Hillary Clinton.

Petraeus equates prudent self-defense measures to hate-speech and considers potential ISIS infiltration an acceptable risk in order for "moderate" Muslims to feel good about themselves.

And just exactly who are these "moderate" Muslims Petraeus wishes to appease?

Is it the Wahhabis in Saudi Arabia, Muslim Brotherhood Qatar, or Sunni Islamist Turkish President Erdogan to whom, collectively, the Obama Administration has recklessly outsourced our Middle East policy?

Petraeus knows full well that it is not an issue of religion, but recognition of the potentially deadly consequences of thousands of violent migrants from a volatile region entering the US en masse.

In the end, the Petraeus argument provides little more than the tired clichés of Islamophobia, that Muslim hostility to the West is caused by verbal slights or other affronts to Islam.

No one is advocating gratuitous insults, but unwarranted appeasement or other emotionally satisfying liberal gestures are, in reality, construed by Muslim leaders as a weakness to be exploited.

In the world of realpolitik, it is preferable to be liked. It is advantageous to be respected. In the absence of those, fear will do.

Who will write the article, "Giving classified secrets to your mistress may aid the Islamists"?

Go back to banging your biographer, you stupid dhimmi.
You are dead to America traitor.

The question to ask is, who does the General agree with?
The answers tell us he's been bought and paid for and somebody thinks his opinion will either make a difference, or, another voice in that lonely room is needed for political purposes. Either way, it sucks to be him.

I'm always stunned that these guys once commanded men. Frighteningly, American men. Every aspect of our society has become corrupted! You have to give it to the progressives. They have fought a long, steady, mostly stealthy war to destroy this country i.e. its institutions, and they have won.

It is amazing to see what happens to today's American leaders when they are faced with financial & character destruction ..
A flip of the coin the wrong way in 2016 & we will be , no more.

Partake us goes Full Monty nuts. Stick a fork in him. He's done!