MAYOR OF LONDON THREATENS TRUMP: Let Muslims in or they will attack America!

The new Muslim mayor of London has issued a warning to Donald Trump: Moderate your stance on Muslims, or they will launch more attacks against America.

Trump recently praised Sadiq Khan for winning London’s mayoral race, and said he would be willing to create an exception in his policy restricting Muslim entry into the United States in order to allow Khan to visit. 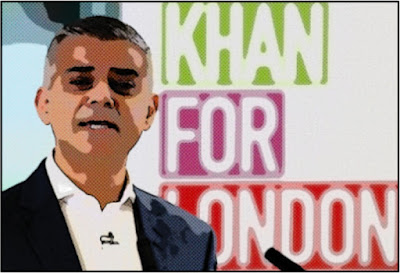 But in a statement Tuesday, Khan dismissed Trump’s invitation, and also denounced his views on Islam as “ignorant,” suggesting Trump’s policies would increase the terrorist threat in both the U.S. and U.K.

“Donald Trump’s ignorant view of Islam could make both of our countries less safe – it risks alienating mainstream Muslims around the world and plays into the hands of extremists,” he said. “Donald Trump and those around him think that Western liberal values are incompatible with mainstream Islam – London has proved him wrong.”

While Khan touted the liberal values of British Muslims, some polls have found worrying indicators that their assimilation is incomplete. A poll in April, for instance, found that two-thirds of British Muslims would not tell the government if a friend or family member became involved with extremists. Half of them said homosexuality should be illegal and over 20 percent supported establishing sharia in the U.K.

Last time I checked my history and the current news, I found Muslims attacking everybody everywhere. Perhaps we could introduce the the Mayor to the business end of a military drone.

Trump sure has all the right enemies, doesn't he!

This is even more evidence that he'll be the best choice for President.

Now if the Old Corrupt Crone gets in instead, she'd probably put on a burka just to please this jerk in London. Or give him a "Behead" button to celebrate his insanity!

Trump: "I will declare Open season with no bag limit on Muslims after the next Islamic Terror attack" File under: 'Things I wish Trump would say.'

.
I hope President Trump visits the UK to meet with the UKIP Party and avoids London.
.

Sounds like it's going to be real fun in London.

Khan's election guarantees Brexit success. We've moderated our views towards Muslims thanks to the butt kissing commander in chief. At the same time, Muslim terrorism has increased 10 fold. Islam, like progressives, is a terminal disease. It must be defeated at any cost.

Why are Moose limbs perpetually peeved, especially from London's "Wrath of Khan?" They should rename their religion "Pislam."

President Donald Trump To Mayor Of London: If you say "Pretty-Please", we will let you come and visit the U.S. for awhile - just don't stay too long, or associate with any "bad elements" while you're here. Oh, and your ignorance is showing very badly - we've already been attacked by Muslims, which is exactly why we're now exercising preventive measures against "immigrants" and other potential "bad elements". Also, make certain when leaving our borders behind to thank us for granting you the visit, and perhaps we'll allow you to come back sometime.

(Whole lotta snotty, unwarranted assholism from some clown that makes obeisance five times a day towards a big black rock while praying to the memory of an ancient barbarian child-molester, rapist and murderer who created a highly-suicidal "religion" based on a deeply-perverted "vision" of an "all-powerful god with a weird name. Watch yer ass, Khan - just 'cause you won a mid-level election in formerly-Great Britain doesn't mean the sun shines out of your gaping butt-hole.)

What's the over/under on when he has Temple Church demolished?