Another completely predictable result of The Obama Doctrine: ever-increasing chaos in the Middle East.

In response to ‘insulting’ film, Egyptians tear down American flag

A frustrating and infuriating situation is unfolding in Egypt today where protestors have scaled the walls of the United States embassy, torn down the American flag, ripped it apart when they couldn’t burn it, and replaced with a black flag with an inscription of the Shahada on it. 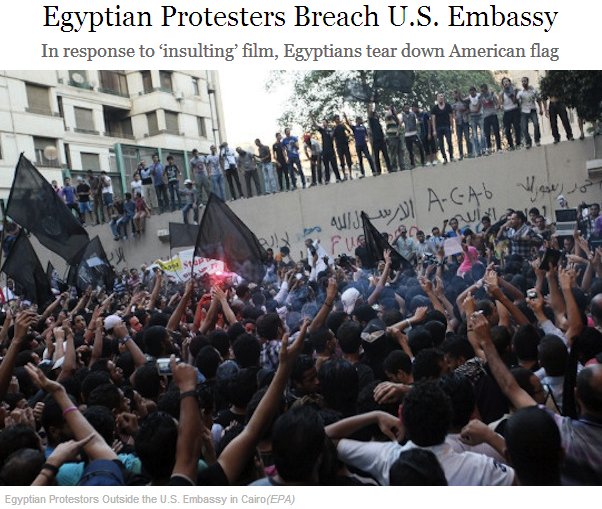 According to reports, the mob is venting its frustration about the Koran-burning pastor Terry Jones, who has made a film (along with some Egyptian Copts) that reportedly vilifies Muslims and their prophet Muhammed... 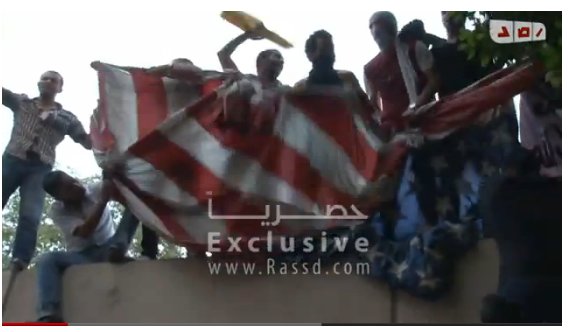 The timing is also worth pointing out, not only for its obvious and insulting resonance today, but because as Eric Trager mentions, the attack comes as Egypt is seeking aid–which the United States has provided a billion dollars of annually since 1979.

Yes, by all means, let's ensure that the Muslim Brotherhood gets $1.2 billion of our money. I'm sure very little could go wrong.

Moslems are insulted .... by the truth (movie) of their past behavior!

Abused other Egyptians citizens like the Copt-christians for instance (threatened, abused, maimed, and murdered).

The US State Dept essentially states we should not 'abuse' freedom-of-speech.

The truth hurts is more accurate!

Yet another check mark for the "Reset" foreign policy masterminds.

Way to go, douche-nozzles. This is so much better than Egypt as an ally.