NO JOKE: If Obama reelected, looks like he'll release the WTC bomber

This report should trouble every American (which excludes, of course, most self-described "progressives"): 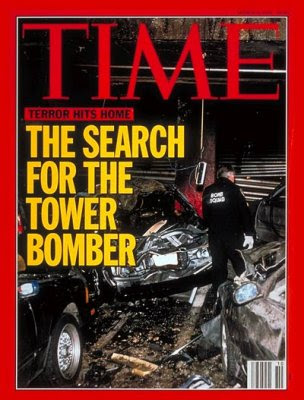 The U.S. State Department is actively considering negotiations with the Egyptian government for the transfer of custody of Omar Abdel-Rahman, also known as “the Blind Sheikh,” for humanitarian and health reasons, a source close to the the Obama administration told TheBlaze...

...The Blind Sheikh is currently serving a life sentence in American prison for his role in the 1993 World Trade Center bombing, but the newly-elected Islamist government in Egypt has been actively petitioning his release. Many have pinpointed a cause of last week‘s unrest in in the country to be protests over the Blind Sheikh’s release — not an anti-Muslim YouTube video.

...A veteran intelligence analyst and researcher for TheBlaze said he met with an official within the Obama administration who told him that the transfer of the Blind Sheikh to Egypt is something that is being “actively considered” by the administration as a solution to the ongoing crisis in the Middle East. His source asked not to be identified.

When asked if the transfer of the convicted terrorist was being seriously considered, the intelligence analyst said yes, according to his source, who stressed that the move, if executed, was not intended to take place or be announced until after the presidential election.

The concerns are legitimate, as evidenced by a report this afternoon that top House Republicans are imploring the White House to keep Rahman under lock and key.

Eight top-ranking House Republicans are pressing the White House not to release “the blind sheikh” from prison, saying that it would be “a sign of weakness” by President Obama...

In a letter to Secretary of State Hillary Clinton and Attorney General Eric Holder this week, eight heads of House committees and subpanels pressed the administration not to appease the acts of violence in Egypt by releasing Rahman.

“Succumbing to the demands of a country whose citizens threaten our embassy and the Americans serving in it would send a clear message that acts of violence will be responded to with acts of appeasement rather than strength,” wrote Reps. Lamar Smith (R-Texas), Ileana Ros-Lehtinen (R-Fla.), Mike Rogers (R-Mich.), Buck McKeon (R-Calif.), Pete King (R-N.Y.), Hal Rogers (R-Ky.), Frank Wolf (R-Va.) and Kay Granger (R-Texas).

The Obama administration could put this madness to rest with a simple statement such as, "We pledge that we will never release the Blind Sheikh."

And this it will not do. Which means the only guaranteed way we'll stop Obama from releasing the World Trade Center bomber is to fire him in November.

probably throw him a party in the WH b4 he splits 4 egypt....

Should he be released? No. Is it a big deal? Only to the camel jockeys in sand land. We have more important things to concern our nation with.