Administration Beclowns Itself Once Again: Amb. Susan Rice Picks a Fight With Libya's Government Over the Fatal Attack in Benghazi 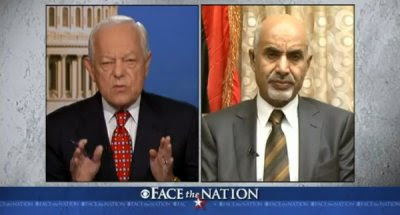 BOB SCHIEFFER: Was this a long-planned attack, as far as you know? Or what-- what do you know about that?

MOHAMED YOUSEF EL-MAGARIAF: The way these perpetrators acted and moved, I think we-- and they're choosing the specific date for this so-called demonstration, I think we have no-- this leaves us with no doubt that this has preplanned, determined-- predetermined.

MOHAMED YOUSEF EL-MAGARIAF: It was planned-- definitely, it was planned by foreigners, by people who-- who entered the country a few months ago, and they were planning this criminal act since their-- since their arrival.

On ABC's This Week, however, Ambassador Susan Rice directly contradicted Libyan officials and said the attack was not premeditated: 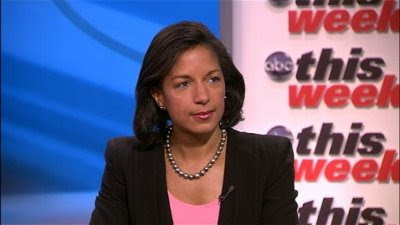 U.S. Ambassador to the United Nations Susan Rice said the attack on the American consulate in Benghazi last week was not premeditated, directly contradicting top Libyan officials who say the attack was planned in advance.

“Our current best assessment, based on the information that we have at present, is that, in fact, what this began as, it was a spontaneous – not a premeditated – response to what had transpired in Cairo,” Rice told me this morning on “This Week.”

...Ambassador Christopher Stevens, along with three other Americans, were killed in Libya following the assault on the American consulate in Benghazi, on the 11th anniversary of the Sept. 11 attacks. Rice said the FBI is examining the attack, saying their investigation “will tell us with certainty what transpired.”

Rice’s account directly contradicts that of Libyan President Mohamed Yousef El-Magariaf, who said this weekend that he had “no doubt” the attack was pre-planned by individuals from outside Libya.

Now let's back up a couple of steps. Clear your head. Take a deep breath. And ask yourself:

What would be more likely to prompt a deadly attack on a U.S. Embassy? Incessant grandstanding by Obama about killing Bin Laden and relentless drone attacks that indiscriminately kill -- or a sad-sack YouTube video that no one watched?

Everyone knows that Rice is covering for the president's feckless foreign policy (or lack thereof) and his obvious dereliction of duty (namely, his refusal to regularly attend his daily intelligence briefings).

Call it by its true name: bleeding from behind.

Something stinks in Libya and I don't think it's Libyan President Mohamed Yousef el-Magaria.

What are the odds of hundreds of Islamic fanatics, standing on a corner, nothing to do, when suddenly, one of them yells out..."LETS GO MURDER THE AMERICAN AMBASSADOR!".

Do they even have the internet in Libya?

Susan Rice is a disgrace. To think of her representing the the people of the U.S. makes me ill.

The administration does not want anyone to see this as it exposed their lies about what's happening:

I feel that way about most if not all of this regime as well as the press.

Actually what really happened was that Stevens told barry and his thugs that there wasn't any oil there and he inadvertently stated that to some Libyans....so they colluded to both take him out!!!

Oh yeah...some poorly put together video that an 8 year old could do better started this even though it was 'released' almost 4 months ago!!!