It must be fun to be a progressive. You get to spend money wildly without regard for who earned that money nor who will have to repay the loans you take out. I refer, of course, to Democrats in general... but also to Blue States like New York, Illinois and -- especially -- California:

The independent State Budget Crisis Tax Force [PDF] has released its analysis of California's finances and found that rather than being a whopping $28 billion in debt, as Gov. Jerry Brown alleged with he came to office, the state is actually a nearly unfathomable $335 billion debt. Brown called it a "wall," as the New York Times noted. But it's really more like a dozen walls. All stacked on top of each other to make a mega-wall that blocks out the Sun.

This is not an exaggeration. Californian's total level of debt, on an off the books, is pushing a fifth of the total annual economic output of the state, which is about $2 trillion. 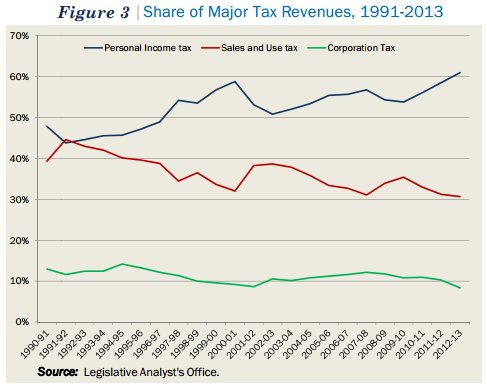 Some of the usual suspects are responsible for this: overspending and undertaxing during boom times, colossal pension liabilities, taking on too much debt. But the report zeroed in on ... a California tax system that relies far too much on the incomes of the wealthy, and in particular on income derived from capital gains, or the sale of stocks, bonds, and other assets...

...new taxes will be approved or disapproved by California voters in November, via the ballot process. But the underlying problem of a tax structure that's exposed to boom-and-bust asset markets, from which the wealthy derive most of their income, remains... There is no easy way to change this, except to build an economy in California where a stable middle class can contribute more substantially to the tax coffers and have enough earnings to spend at a level that can enable sales taxes to address imbalances.

Until spending and outlandish union contracts are reined in, California's efforts to tax its way out of the debt crisis are guaranteed to fail. Sucking more money from the productive sector to fund an increasingly out-of-control government can't succeed and won't succeed. It will simply drive more of the productive class away.

And the dichotomy of how the Left behaves with its own money versus how it treats the taxpayers' funds is best explained by Mark Levin.

at 11:10 AM
Email ThisBlogThis!Share to TwitterShare to FacebookShare to Pinterest
Labels: Brown, Crime, Democrats, Economy, Unions