I really can't wait for the debates. Off his teleprompter, Barack "57 States" Obama is Joe Biden with a better speaking voice.

President Obama has learned something during his presidency: You can’t change Washington from the inside. 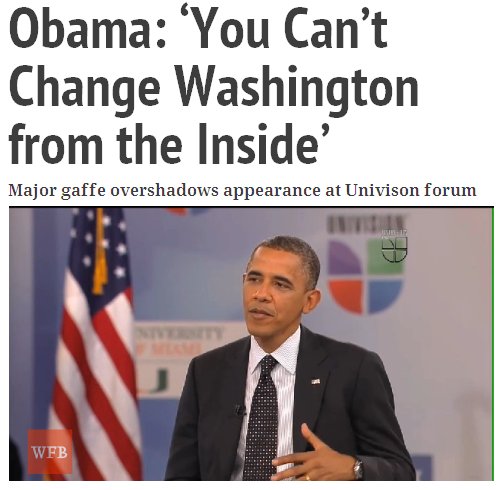 “The most important lesson I’ve learned is that you can’t change Washington from the inside,” he told a Univision forum Thursday. “You can only change it from the outside.”

The remark immediately set off the political media on Twitter... “(This) is perhaps Obama’s worst gaffe since he met Joe the Plumber?” BuzzFeed editor Ben Smith asked on Twitter Thursday afternoon.

.@BarackObama said today “you can’t change Washington from the inside.” RT if you agree.

As of this posting, it has been retweeted 542 times. In seventeen minutes. Keep the retweets coming!

BOOM! Romney tells crowd we’ll give Obama a chance to change Washington from the outside in November! therightscoop.com/boom-romney-te…—
Rhonda Koenig (@Rhondako) September 20, 2012

The The Washington Examiner relays another great reply:

“We’ll get the job done from the inside – Republicans and Democrats will come together,” Romney continued today. “He can’t do it. His slogan was ‘Yes, we can.’ His slogan now is ‘No, I can’t.’ This is time for a new president.”

These responses are deserving of a few bucks if you have 'em to spare. Well done, Romney Campaign... well done.