Because -- historically speaking -- giving Nazis authority over others has worked out so well: 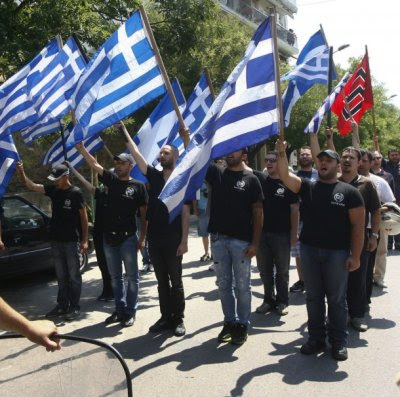 Greek police have been accused of directing the victims of crimes allegedly committed by immigrants to seek retribution from the violent neo-Nazi Golden Dawn party.

Golden Dawn is increasingly taking the law into its own hands with the complicity of security forces, the Guardian reported.

Numerous Athenians told the British newspaper that police are openly advising people to seek Golden Dawn protection instead of dealing with their complaints.

"They immediately said if it's an issue with immigrants go to Golden Dawn," explained a US-trained civil servant who called police following an incident involving Albanian immigrants.

Support for the Neo-Nazi party is soaring in the near-bankrupt state, as are racially motivated attacks on immigrants... Immigrant communities accuse police of turning a blind eye to this sort of crime.

"In the past six months, knife-wielding fascists have attacked some 500 persons with impunity," Javied Aslam, the head of the Migrant Workers' Association in Greece and leader of the Greek Pakistani community told the BBC.

Although it sounds unrelated to the American economy, in truth this should serve as a dire warning to anyone concerned with the future. Unchecked deficit spending will lead to bankruptcy as certainly as night follows day. And civil unrest, despotism and tyranny follow close on bankruptcy's heels.

Unlike Greece, however, no country is large enough to bail out the United States.

golden dawn should rather lay down and way for the police to run over them, just like the useless EDF has done.

mmm useless EDL, that's it. They're only good for the police to try their truncheons on them, and for the media to have someone whom to call nazi and take the blame for muslim savagery.

It is better to err in action, than to err through inaction. I suspect Tommy Robinson and the others are too busy organizing on the street and standing against neo-nazi's, reds, iscumofascists and a dhimmified government than typing on a keyboard, like you and I. What would you have them do, and what are you doing.

Golden Dawn could be neo-Nazis, I don't know enough to judge on that, but Ross misses the central point. When stressed, "multicultural societies" devolve into ethnic spoils groups.

WHY on earth are there Bangladeshi dishwashers in Greece? Why should Greeks go hungry in a crisis so Bangladeshis can eat? Why should Bangladeshis, and Pakistanis, and Somalians, and the like all be in Greece in the first place? WHY would anyone expect anything good from that? WHY when after 50 years of PC, Multiculturalism, and Diversity which equals "White guys are all evil and Western Culture worthless, non Whites much better" would anyone at all be surprised about Golden Dawn?

If the Greek Government and Cops won't stand up for ordinary Greeks (as opposed to Bangladeshi dishwashers who certainly don't belong in Greece in the first place) is anyone surprised by this?

Yes a flood of cheap EU money kept this on the back burner. But the central problem is not a lack of money. It is the idiotic diversity or invite the Third World in, that is the main problem. That lack of money exposes.

The people who go around accusing everyone they disagree with of being "Neo-Nazis" are the real threat...

Neo-Nazi, Klan, vigilantism, etc. Given civil unrest that is bad enough, given a threat to a basic culture that is strong enough, and given a breakdown in law enforcement protectionist groups WILL arise.

Where is the problem? Why would Greece want or need immigrants now anyway? Greeks are going hungry. Immigrants are working jobs real Greeks need. Time to show the immigrants the door and if they won't take it willingly, well then they can be "assisted" to see that it's time to get out.

Calling Golden Dawn neo-Nazi suggests Facism is a german import alien to Greek history and culture. Wiki the term 'National Youth Organisation (Greece)' and you will get the idea Golden Dawn are nothing new. Anybody hear of Sparta?

There is another lesson here: When the existing organs of law and order break down and people can't rely on them, they will turn to those who can and will provide.

Government is not some magical organization, it is simply how people get together to get certain things done. When the formal government fails, as Greece has failed, the informal government will rise, as night follows day.

"Bangladeshi dishwashers are taking jobs the Greeks need". Yeah, that's happening here too. every high school kid I know is trying to cut lawns and wash dish. Mexicans are crowding them out.In a pig's butt. I am for strictly enforced immigration laws. period. but that old nonsense about immigrants taking jobs from the locals? I washed dish. I didn't see too much in the way on non Mexicans competing for that job. The Greeks want 13 months for 12 months of work, early retirement, and massive benefits packages. That in not a group that typically sees themselves on the feeding end of a Hobart.

When the organizing principles of society break down, the people will organize themselves by whatever remains. In decending order, they are Nation, Class, Race, Clan, Family, and finally Individual. Greece is long past acting as a nation, and even class warfare is proving ineffective, because they have run out of Other People's Money. So they are moving down the list to Race.

Needless to say, things get uglier and uglier the farther down this list you go.

It is a modern coceit that the Germans invented racial supremacy with the NAZIs. The fact is, Naziism lies beneath the veneer of every society. The modern state gives people a better and more profitable way to organize themselves. But when the state fails, the racial supremacists are there, waiting, as they always have been and always will be.

We need the NSDAP! Somebody tell me ONE thing that was bad or wrong about the NSDAP (Hitler's Germany)???

Whiskey has it right!

The Jews have lied to us about the NSDAP and Hitler and the Holohoax.