CBS: Obama has three-point edge over Romney! (Er, please ignore the wildly inappropriate sample we used to get there)

Just when you thought the media couldn't become even more of a laughingstock, they try something like this:

The polls are specifically designed to drive a narrative that Obama is surging and Romney is struggling. Increasingly, though, the polls are having to go to ridiculous efforts to support this meme. Friday's CBS/New York Times poll, for example, uses a D+13 sample of registered voters. This is absurd. 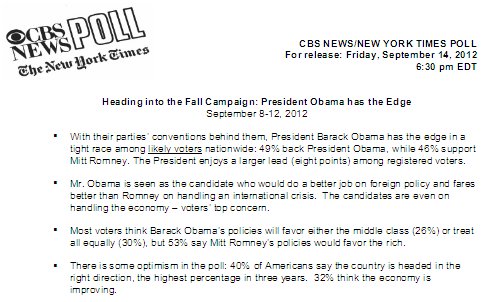 Let's try a simple thought experiment. Imagine if, for a week, all media polls decided to use a sample that replicated the 2004 electorate--a D+0 model. Given the GOP's enthusiasm edge--even the CBS poll found Republicans voters with a double-digit lead on enthusiasm for the election--the electorate is going to look a lot more like 2004 than 2008. Imagine how the narrative of the campaign would change. The CBS poll found Romney beating Obama among Independents by 11 points. With a balanced partisan sample, Romney would likely post consistent leads against Obama.

Let me repeat: Even this pathetic excuse for a Times poll shows Independents breaking for Romney by a double-digit (11 percent) margin.

Furthermore, more likely voters are self-identifying as Republicans, not Democrats. The numbers this year would indicate that an R+3 model is required for accuracy.

And an R+3 model by these corrupt SOBs would have Romney winning by a very formidable margin.

We are watching legacy media die, right before our eyes. Not only is the media utterly corrupt, but so are their polls, "news" articles, and op-eds.

This poll will be widely broadcasted on all the state controlled media outlets the next 5 days. Alan Colmes, Shep Smith, Bob Beckel and the cadre of Liberals on Fox will be having orgasms right beside Tingles and Sgt Schultz.

I have no doubt that in reality Romney has a comfortable lead. My only worry is, like QueMan said, that the media will use these cooked up "too close to call" polls to justify blatant fraud on election day. Voter intimidation, magical bags of votes appearing in blue districts, missing absentee ballots by overseas servicemen. We've seen it all before, and I expect to see it again even worse this year.

If it ain't even close, their cheating won't matter.

Be of good cheer.

All we need is one percentage point extra to account for "The Obama Factor" (illegal aliens, felons, and the dead all magically casting their votes for Democrats).

A tidal wave is building.

OK, so, if king putt won 2008 by a 3 percent margin, lets not consider the margin of democrat party vote fraud, which is surprisingly, estimated at 3%, I find it an incredible stretch of pure BS that after 3 plus years of unmitigated economic disaster, 16 plus % unemployment, gas prices at historic levels, political and social turmoil suitable to a banana republic undergoing a coupe, to name just a few acts of cloven piven agenda by the usurper's regiem and his gang of thieves, that the won has retained the same number of voters today as in 2008.
I mean who the fuck do these polling bullshit artists think they are fooling?
Because it ain't me or a single person I know or have met in the sphere of my life.
Not one person among hundreds. And I'm one guy in a nation of 300 plus million people.

These polls are a function of imposing tyranny by the traitors of the 5th column MSM.