Ruh Roh: Producer of Anti-Islam Film Was a Fed Informer

Hillary Clinton's shrill disclaimers notwithstanding ("The United States government had absolutely nothing to do with this video"), it would appear that federal law enforcement officials were employers of the film's producer:

...Clinton’s attempt to distance the U.S. from “Innocence of Muslims”--and, by extension, its felonious producer--may be complicated by the revelation that Nakoula Basseley Nakoula became a government informant after his 2009 arrest for bank fraud, The Smoking Gun has learned. 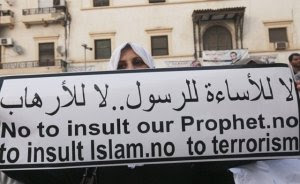 Though many key documents from the U.S. District Court case remain sealed, a June 2010 sentencing transcript provides an account of Nakoula’s cooperation with federal investigators in Los Angeles (and how his prison sentence was reduced as a result).

Nakoula, 55, was arrested in June 2009 for his role in a check-kiting ring that stole nearly $800,000 from six financial institutions by using stolen Social Security numbers and identities. Nakoula was named in a six-count felony indictment accusing him and unnamed “co-schemers” of perpetrating the bank fraud.

Denied bail, Nakoula, a married father of three, was locked up at the Metropolitan Detention Center in L.A. when he began cooperating with Justice Department lawyers and federal agents. During a series of debriefing sessions, Nakoula provided investigators with a detailed account of the fraud operation and fingered the man who allegedly headed the operation, according to comments made by his lawyer at sentencing...

Shhh. No one tell Jay-Z, Beyonce, or the roughly 56 million Islamists currently protesting the U.S. Government.

Need it be said?
"Wag the dog"

How do we know that he wasn't ORDERED to produce this film so that it would provide a handy signal to Muslim rioters? The purpose would be to divert to foreign policy from the economy.

So he worked for the FBI.

And who does the FBI work for?

It starts with a "DA" and ends with a "JOOOOOOS!"