Ta da! The President of the USA admits he can’t make heads or tails of those pesky Egyptians:

Egypt not an ally, but also not an enemy, Obama says in wake of protests 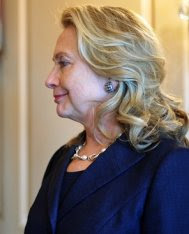 Meanwhile, Hillary is starting a new career as a film critic. Pauline Kael, where are you when we need you?

It’s the movie, stupid. After less than four years in office the Obama regime has already accomplished so much. Now imagine what they’ll achieve if we give them four more.

Actually, as John Nolte tweeted earlier, the most stunning statement in this whole foreign policy debacle is Obama's admission that his policies have lost an ally in Egypt. They are no longer an ally.

I shudder to think what four more years of this fecklass madness will bring us.

NYT: November 25, 1993
President Clinton met today with Salman Rushdie in a gesture that the White House said was intended to convey America’s abhorrence of Iran’s refusal to lift the death threat against the novelist.
Mr. Rushdie also conferred at length with Secretary of State Warren Christopher and Anthony Lake, the national security adviser. Their hourlong conversation, in an office at the White House, represented a sharp shift from the Bush Administration’s refusal to meet with Mr. Rushdie on the ground that it “might be misinterpreted” in the Muslim world. Message Against ‘Intolerance’

Fifty years ago no one would have guested that the president of the United States would be afraid of a bunch of dark age barbarians.

Obama didn't lose an enemy, he undermined the part of an allied nation our nation could depend upon, overtly, and probably covertly as well. He helped that nation at least lose it's status as ally and probably further, helped hand it to our nations enemies. Now, don't get me wrong, Carter did the same thing with Iran. Which is worse? I'd have to... re-read some stuff and do some tabulating... in the small view, and history takes time to resolve... I would say Zero takes the cake, as he did the same thing in many nations, one of which just murdered and perhaps sodomized our ambassador and other diplomatic officials.

Hillary doesn't look half bad without the bull dyke hairdo.

Actually, I agree with Obama.

But I can understand that somethings a president doesn't say in public - and this is one of them.