Well, this qualifies as interesting:

If you haven’t checked it out, please visit UnskewedPolls.com... Okay, so this website factors out the deliberate skewing that the Left is inserting in all the current national polls to give Barack Obama a lead over Mitt Romney when in reality Obama is trailing Romney and losing the election. 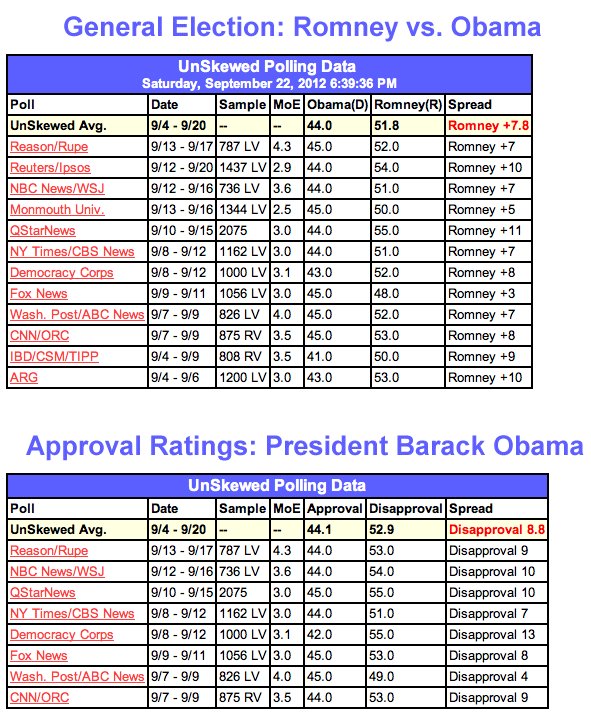 The corrupt, vintage media is running this propaganda for three reasons: 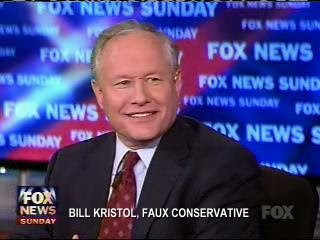 • Showing Obama in the lead causes a “bandwagon effect” where low-information voters think to themselves “Obama’s winning, and I like betting on winners, so I’ll vote for him too, I guess since the tee-vee told me I needed to”
• Eeyores in conservative ranks are a skittish, worrisome lot by nature and will seize on any poll with Obama in the lead to collapse onto the ground in tears, screaming “We’re DOOOOOOMED!” because they are gluttons for attention
• The Legion of Gloom (that band of Fifth Column writers at conservative sites and in the media) just loves running these polls with headlines like “Can Romney Still Win?” because Eeyores eat that garbage up like it’s McRib sandwiches, three for $5, and this succeeds in Eeyore-breeding (the process of creating new Eeyores by running nonstop poll-driven headlines that “Romney is losing! Doom is coming!”).

...Do you ever see headlines like this on TV or any of the Left’s sites?

• Can Obama still win? Considering he is polling far less than 50% in accurate samples that reflect current voter affiliation in this country, this is the question everyone should be asking right now… is there any way in Hell for Obama to win this, even with massive voter fraud? I think the answer to that is no. Too bad the jackasses on conservative sites fail to ask this question and instead love running “Can Romney still win?” instead.

• Will Obama Overcome? No, he won’t. Even here in Illinois, Obama’s ground game is week, he’s not paying out street money to thugs because he doesn’t have the funds available, and Democrats find nothing inspiring or motivational about his campaign...

• Does Obama Need A Shakeup? Yes, but it’s too late for that. Do you know that Obama staffers are sending out resumes for their next jobs, post-White House? David Axelrod long ago moved on to other things here in Chicago. He is minimally focused on Obama’s re-election campaign because he knows Obama won’t win... Axelrod left Obama after the 2010 midterms. He did not think he had until 2014 in the White House. THIS SHOULD TELL YOU SOMETHING.

• Is Obama Losing? Hell to the Yes. His campaign sends out 5 or 6 emails a day begging for money. Not “asking”. BEGGING. I’ve never seen anything so desperate. I am surprised he has not dragged Sally Struthers out of her house of clutter and junk (she was recently outed as a major hoarder) to make commercials for him begging for money like those old “Feed the Children” spots in the 80s where she’d lay down guilt like it was molasses. Michelle Obama sent emails out asking people to skip their family’s dinners and donate the money to the campaign. Obama asked people to sell their things at yard sales or on Craigslist and give him the money. Sometimes the emails I get from Joe Biden asking me to have dinner with him seem so creepy I want to report him as a romantic stalker. It’s all SO STRANGE and so desperate.

Some of the comments are interesting: 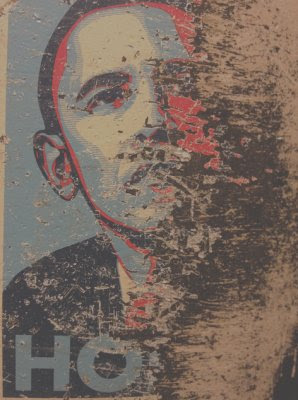 • I live in deep blue Brookline, MA, and my Romney yard sign stands out like a sore thumb, but it hasn’t been stolen yet, and I haven’t seen a single Obama yard sign anywhere. Last time they were everywhere, and almost every other car had an Obama bumper sticker. There are some of those this time, but nowhere near as many.

• NC is considered gone for Obama. He’s still advertising here, but no campaign stops. He and Biden were in NC every fifteen minutes in 08, as were Palin and McCain. The closest campaign stops R/R are in VA. And where in VA? Nearer to DC, the blue strongholds. Want something far more reliable to indicate the state of the race – look at where they are campaigning.

• Here in Ohio, There are NO Obama signs except in front of the Union Halls. Even in the blue parts of the states such as Cleveland, Columbus & Cincinnati, there are few if any signs. College campuses same thing few if any signs. In the suburban & rural parts of the state, NONE. Personally, I think his approval rating in Ohio is about 40%. All the commercials Team Obama & MSM spin have been running in this state are just a waste of money. Voters in this state voted down Obamacare by 2 to 1 margin last November. .Why would they turn around & reelect him. As far as, the debates probably won’t matter in the end. Romney will win Ohio.

• ...to prove the point you are making about polls, I looked up the NJ Governor’s poll from 2009. The Real Clear Politics poll average had Chris Christie winning by a single point. He beat Jon Corzine by a whopping 6 points. Even Rasmussen, who is the most accurate, was off by 3 points... And if you scroll down, just a week to 10 days prior to election day some of the polls had Corzine up by 4 to 5 points.

Tell the media to kiss it. Toss a couple of bucks to America's Comeback Team.

Do you have any information/guess as to why Obama is priced at 70% to win on Intrade?

821Excellent information. I agree with the remarks regarding conservative web sites publishing dooms day polling information and running a headline that confirms the skewed polling sample. Hot Air is the worst.The Republican party should run advertisements with this information 24 x 7.

I'm glad that guy in Brookline, MA was able to get a Romney yard sign. Here in Iowa, a supposedly crucial swing state, they're non-existent. I requested one three weeks ago. Still don't have it and neither does anyone else in this county. When I attempted to contact our local Rep headquarters I discovered there was no phone listed for them anywhere. The closest thing I could find was a link to The Iowa Republican website which, interestingly, does not even mention the name "Mitt Romney" on its main page. Romney's blowing it here in Iowa and he has no one but himself to blame.

They take this one step further at insidepolling.com where the polls are re-weighted to historical exit polling data levels for 2004, 2008 and 2010. There are also other models, swing state re-weighted polls and electoral projections.