The 10 Most Important Stories of the Embassy Attacks...

Sure, why would anyone think there might be some violence on 9/11?" ...Additionally, the US was warned that extremists might attempt to burn down the embassy. On Monday.

2. Obama skipped the PDBs even though intelligence sources report that the attacks were planned and coordinated.

Sources are telling CNN that the attack on the U.S. Consulate in Libya which killed Ambassador Chris Stevens was planned by attackers who used the protest outside the consulate as a diversion.

3. The first response to the coordinated attacks in Libya and Egypt by the Obama administration was... to apologize to the Islamists: 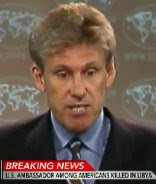 The Embassy of the United States in Cairo condemns the continuing efforts by misguided individuals to hurt the religious feelings of Muslims — as we condemn efforts to offend believers of all religions...

Today, the 11th anniversary of the September 11, 2001 terrorist attacks on the United States, Americans are honoring our patriots and those who serve our nation as the fitting response to the enemies of democracy. Respect for religious beliefs is a cornerstone of American democracy. We firmly reject the actions by those who abuse the universal right of free speech to hurt the religious beliefs of others.

4. . Shocked by the administration's statement, the Romney campaign blasted the apology.

The GOP nominee offered no regret for criticizing the president in the midst of an unfolding international crisis. "It's never too early to condemn attacks on Americans and to defend our values," Romney said... Romney condemned the violent protests and expressed condolences to the families of those slain in Libya, including the U.S. ambassador there. He said that instead of speaking out forcefully against the initial Egyptian breach, the U.S. Embassy in Cairo had seemed to sympathize with the attacks by issuing a statement that he called "akin to an apology."

5 . Liberal blogs -- and their primary consumers in vintage media -- needed a way to deflect criticism from President O'Carter. Their meme: Mitt Romney shouldn't criticize an apology... that the Obama administration itself later disavowed.

At 11:53pm last night Talking Points Memo released a statement from the Obama campaign condemning Mitt Romney for criticizing something the White House itself disavowed -- an appalling apology issued by the State Department.

Eight hours later, President Obama finally got around to condemning the monsters who attacked us on our own soil and killed our fellow citizens.

Yesterday, on the 11th anniversary of September 11, the Obama White House snubbed Israeli Prime Minister Benjamin Netanyahu, accepted an invitation from David Letterman, and apologized to Islamists upset over a film that mocks Islam and Mohammed -- something "artists" in America do to Christianity with my tax dollars on a fairly regular basis.

6. An open microphone, in fact, revealed that vintage media coordinating a gang attack on Mitt Romney:

Before Romney issued his statement today, an open mic capture the press coordinating questions to ask Romney, with one saying “no matter who he calls on we’re covered on the one question”.

7. In fact, the Obama administration condemned Mitt Romney's criticism before it bothered to condemn the Islamist attackers.

8. Why in hell wasn't the Libyan Embassy protected by U.S. Marines?

A Marine Corps official who would not speak for the record told Danger Room that the Corps did not and currently does not have assets in Benghazi.

9. As the U.S. embassy burns and our ambassador's body is dragged through streets, we discover that -- just as Obama skipped a week of daily intel briefings leading up to 9/11 -- he is now heading to Vegas for a fundraiser with Jay-Z and Beyonce:

10. And the President found time to do the Letterman show and celebrity fundraisers, but could find no time to meet with the Israeli Prime Minister as the Middle East burns and Iran readies its nuclear-tipped missiles.

This president needs to be pink-slipped. He's Jimmy Carter squared.

Thank you for posting this. On every move, Obama fails, fails, fails. The campaign must go on. Forget about governing. But then Obama is so much more versed in foreign affairs, he knows when to leave our embassies exposed and when to spike the football.

There were Marines in Libya, two were killed. How many were there I don't know.

That was a consulate in Benghazi, not an embassy. Big difference when it comes to level of protection. Get your facts correct before you post! All I can say.

Embassy or Consulate? Doesn't matter. They are both considered American soil.

Level of protection? It can be as high as the POTUS will set up. Evidently the current POTUS doesn't consider the Middle East with their various levels of absolute hatred for the U.S. a high risk area.

Out of all the content of this article; out of all the deficient behavior of the President ... you choose to mention consulate versus embassy?

Do you pick fly shit out of pepper as your day job as well?

The POTUS couldn't provide protection for the Americans at the Embassy/Consulate but he does provide round the clock security for Valerie Jarrett. Even when she was on vacation at Martha's Vineyard, she had the full detail.

Does ANYONE still doubt ovomit is a koranimal?

This is Obama and if we don't do somthing about it on election day we are going to have 4 more years of him and most likely is not going to get better.

Oh, and those saying it makes Romney unelectable - how quickly they forget:

Their poor and their angry find meaning in lust--
Brutal lives drift on sand covered seas.
These outcasts profess they may murder the just,
Unless free men renounce liberty.

They find thrills and adventure in the heat of the crowds--
The destruction of honest men’s work.
But the rush of the riot somehow never allows,
Any questions about their goals’ worth.

We had signs of their vision of bloody redress—
False “reprisals” for offenses contrived.
But our own Socialist Masters ignored each request,
To forestall or repel crafted lies.

So our self-absorbed “leaders” claimed they were “shocked”,
To see vengeance unearned burning bright.
When our citizens were slain, and our liberty mocked,
Corrupt Media raged like whores in the night.

Yes, our “sages” went whoring on the “5 O’clock news”,
And colluded with our enemies abroad.
And our socialist papers defiled honest views,
Of those Patriots who renounced them as gods.

Our Republic is shaky, our confidence dims,
All the world now perceives us as weak.
Unless we first reject our enemies within—
Then our foreign foes win all they seek.

ROMNEY AND RYAN FOR THE REPUBLIC –