Cheer Up! Things Could Be Worse. It Could Be 2013 Under a Hypothetical Obama Second Term!

Ben Bernanke's latest announcement -- to print money until morale improves -- is called "Quantitative Easing 3", the third round of asset purchases designed to keep interest rates artificially low. QE3 is a tacit admission that every one of President Obama's economic policies have failed.

The long-term result is certain: hyperinflation. The short-term result can be seen today: commodity prices (gas, gold, etc.) are ratcheting up dramatically as the dollar is devalued by incessant money-printing.

...the FED's QE3 will stoke the stock market and commodity prices, but in our opinion will hurt the US economy and, by extension, credit quality. Issuing additional currency and depressing interest rates via the purchasing of MBS does little to raise the real GDP of the US, but does reduce the value of the dollar (because of the increase in money supply), and in turn increase the cost of commodities (see the recent rise in the prices of energy, gold, and other commodities). 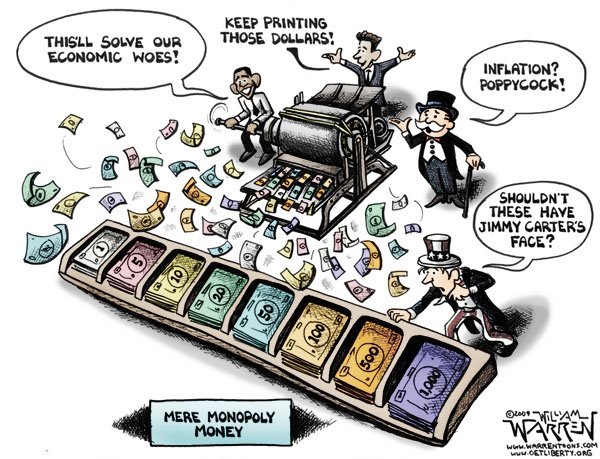 ...The increased cost of commodities will pressure profitability of businesses, and increase the costs of consumers thereby reducing consumer purchasing power. Hence, in our opinion QE3 will be detrimental to credit quality for the US.

As if to confirm the harm QE3 will do to manufacturers, Bloomberg reports .

Industrial production in the U.S. unexpectedly fell in August by the most since March 2009, highlighting risks to the economic outlook a day after the Federal Reserve boosted record stimulus.

And it's going to get deeper in 2013 as Taxmageddon and Obamacare hit small businesses with devastating force:

The International Franchise Association held a convention in Washington this week where most of the Radio Shack, Dunkin Donuts, Curves and other franchisers were grumbling about new federal regulations, especially the impact of Obamacare.

...he pulled out his powerpoint showing how funding Obamacare will cut his--and likely their--profits in half overnight. With simple math the small business folks understood, he spelled out that their only choice is to slash employee hours so they aren't eligible for company-paid health care or stop offering insurance and pay the $2,000 per employee fine.

Providing no insurance would result in a federal fine of $158,000, $29,000 more than he now spends but the lowest cost possible under the Obamacare law. So he now views that as his cap and he'll either cut worker hours or replace them with machines to get his costs down or dump them on the public health exchange and pay the fine. "Every business has a way to eliminate jobs," he said, "but that's not good for them or me."

If we don't crush the Democrat Party at the ballot box in November, even more people will fall into poverty -- all races, all creeds, all colors, all religions -- and more people will become dependent upon a government that is bankrupt.

Society is fraying and it is up to each and every one of us to save it in November. Marshal your family members, your friends, your colleagues, your neighbors.

The Democrat Party must be smashed politically if we are to save this country.

when a citizen prints worthless money it's called "counterfeiting"
when the gov't does the same thing,it's called "quantative easing" some good deal the gov't has isn't it?

The new word for QE3 forever is "QEternity."

Quantitative easing, the national debt, and the slippery slope to hyperinflation