We've been reading about the "recovery" ever since Barack Obama took office. For most Americans, however, the recovery has yet to materialize. Cafe Hayek relays the following chart from the St. Louis Fed: 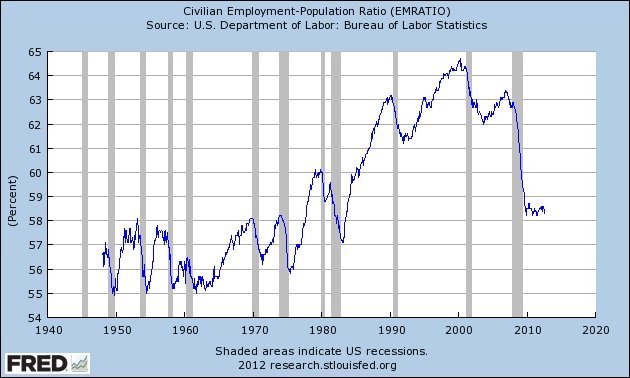 In [an] interview I did with John Taylor, he pointed out that the ratio of employment to population hadn’t rebounded at all in the current recovery. How common is that? Here is data from FRED that looks at the ratio of employment to population. You have to go back to the recession of the early 1960′s (and it wasn’t much of a recession) to see anything like the lack of rebound.

The gray periods are recessions. The ratio usually rebounds sharply in the recovery. But not for this one...

Question for you drones: what makes you think that after three-and-a-half years of this miserable failure on the employment front that things are going to get better?

Here's a hint: with 2013's fiscal cliff, the deficit cliff, and the Obamacare cliff, things are about to get decidedly worse if this disastrous administration is returned to office.