Who needs fiction when there are real-life stories like this?

An ancient Buddhist statue that a Nazi expedition brought back from Tibet shortly before World War II was carved from a meteorite that crashed on Earth thousands of years ago... according to European researchers publishing in the journal Meteoritics and Planetary Science this month. 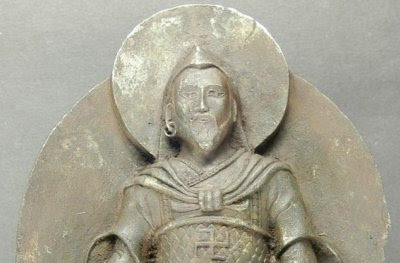 ...Elmar Buchner of the University of Stuttgart said Thursday the statue was brought to Germany by the Schaefer expedition. The Nazi-backed venture set out for Tibet in 1938 in part to trace the origins of the Aryan race — a cornerstone of the Nazis’ racist ideology.

German and Austrian scientists were able to get permission from its new owner, who wasn’t disclosed, to conduct a chemical analysis that shows the statue came from the Chinga meteorite, which crashed in the area of what is now the Russian and Mongolian border about 15,000 years ago.

The meteorite was officially discovered in 1913, but Buchner said the statue could be 1,000 years old and represent a Buddhist god called Vaisravana.

...The Nazis were probably attracted to it by a left-facing swastika symbol on its front. The swastika has been used by various cultures throughout the ages, but the Nazis tried to appropriate it as the symbol of their ideology, going so far as to put a right-facing version of it on their red-and-white flag.

Rumors that Organizing for America had attempted to steal the statue and emblazon it with the creepy, circular Obama logo could not be confirmed at press time.

at 3:27 PM
Email ThisBlogThis!Share to TwitterShare to FacebookShare to Pinterest
Labels: Scitech

The rumors have been confirmed.