"UNEXPECTED": Yet another downward revision of GDP confirms we're now in year four of the Obama Depression

Who would you believe? A man whose ads never refer to his track record -- or your lying eyes?

On Thursday, the Department of Commerce revised its second quarter estimate of economic growth (in terms of real gross domestic product, or GDP) down to 1.3 percent from 1.7 percent... Anything less than a 2 percent rate of growth is more typical of an economy wilting toward recession than an economy recovering from a recession...

Indeed, bad policies emanating from Washington are creating an environment where recession is more and more likely. 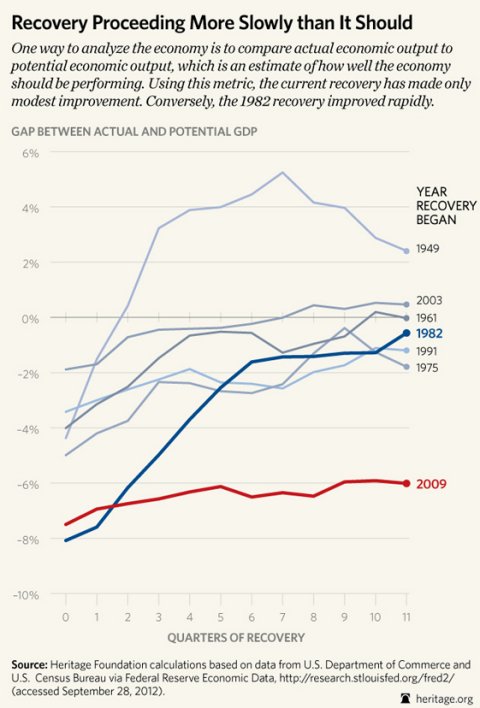 ...Taxmageddon, a $500 billion tax increase, waits in 2013 if Congress and President Obama fail to act. The Heritage Foundation has argued that uncertainty associated with Taxmageddon is already dissuading businesses from investing in capital goods and hiring new workers. Domestic uncertainty is compounded by uncertainty about the future of Europe.

Reagan inherited a far worse situation from Carter than Obama did. Inflation was nearing 20 percent. Unemployment was headed for double digits. Tax rates were crushing the private sector. And within two-and-a-half years -- working with a Democrat Congress -- Reagan had turned the entire economy around.

Obama's priority, on the other hand, was passing massive government programs: from housing "relief", to Obamacare, to cap-and-trade, to financial "reform", to a takeover of the student loan industry, to gutting welfare's work requirements, to expanding the food stamp state, and so on. He paid as much attention to his "Jobs Council" as he did to the bipartisan Deficit Commission. Which is to say: none.

Obama's priority isn't recovery. It's control. Control over you, the individual.

We have one chance to turn this mess around, and it comes on the first Tuesday in November. Tell everyone you know. This is it. It's the Superbowl for America.

Love visiting your blog! Keep up the great work!!

"Control over the individual"
I'm starting to believe that the TSA is part of an experiment with the goal of making Americans more obedient. Defy the orders of even the lowest level of Government worker and they will have the power to make your life miserable.

Thanks for being so damn good at this, Doug. I put links to your site in the comments at TheRightScoop with regularity.

Just yesterday I compared and contrasted the chart you put up titled "The [holding two fingers up] Recovery", with a chart put up by a lefty at Business Insider, which was a prime example of tortured data.

Anyhow, everything is getting worse. The only thing in the world doing well under Obama is Al Qaeda.