BUMBLER-IN-CHIEF: ‘I Want to See Us Export More Jobs’

Of course he does. Each of our 57 states must export more jobs, according to the smartest man ever to serve as president, although we can't be sure just how much of a genius he is because his college transcripts are unavailable.

Obama misspeaks: "I want to see us export more jobs" 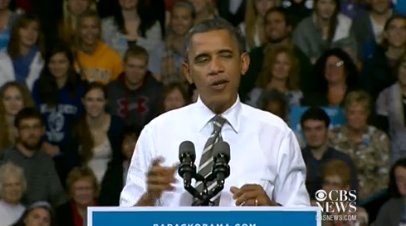 Speaking at Kent State University in Ohio on Wednesday, President Obama misspoke, stating, "I want to see us export more jobs." Quickly correcting his remark to be, "export more products," he joked, "I was channeling my opponent there for a second."

Maybe we should have a Navy corpse-man check him out.

Yet another reason that SCOAMF is the quintessential description of First Air Marshal Obama, the failiest man ever to serve as President.

In the Old Days, we called that a Freudian slip (which was when you said something you really thought, but were trying to say something else).

I give him quick-thinking credit, though, for following up with "I was channeling my opponent". Until you realize that "channeling" refers to someone dead.