We already knew that legacy media was completely and utterly corrupt, with ironclad confirmation coming in the form of the recent gang-attack conspiracy against Mitt Romney.

Now, @NumbersMuncher (via @AriFleischer) represents graphically that very same corruption. Namely, how most recent Bizarro-Polls show Barack Obama in the lead despite a disastrous economy and a Mideast in flames. 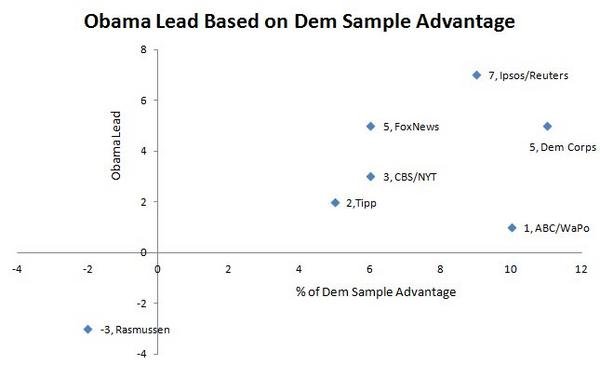 Briefly put, the polls showing the SCOAMF in the lead are oversampling Democrats to bias the results.

But what should the samples be? Rasmussen (the most accurate of the 2008 presidential pollsters) posits the following ratio: 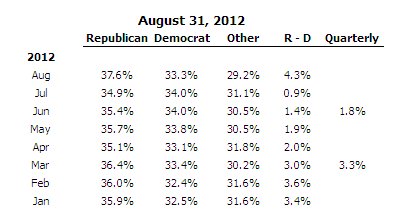 Point 2: Among likely voters, independents break for Romney, 51 percent to 40 percent (according to the ultra-liberal National Journal).

So let's just get this straight: more people identify as Republicans than Democrats and Independents break by a double-digit margin for the Romney-Ryan ticket.

And, in the midst of an conflagration in the Middle East, QE3, and an economy back in recession, the media is trying to save this election for the SCOAMF.

Here's a hint, Chrissie Milbank-Dionne: It. Ain't. Gonna. Work. 2010 will look like a fond memory in comparison.

what does SCOAMF stand for?

Thank-you, I have asked for that visual at HotAir for a long time

Stuttering clusterf*ck of a miserable failure

Suek, if your question is serious, it stands for STUTTRING CLUSTERFARK OF A MISERABLE FAILURE or word to that effect.

Stuttering Clusterf##k of a Miserable Failure.

The graph should have a slope=1 line passing through the origin to show the actual baseline when the sample is biased. Anything below the line (in this case) would represent Romney being ahead. All the points are below the line

This post is exactly what we need to see. It illustrates the media skew. I believe that independents ARE more for Romney, because of Twitter experience I had over the weekend