Crazy Obama-Middle East conspiracy theory? Or is it so sane that you just blew your mind?

Mark Langfan's detective work leads to some fascinating -- if not outright terrifying -- conclusions. 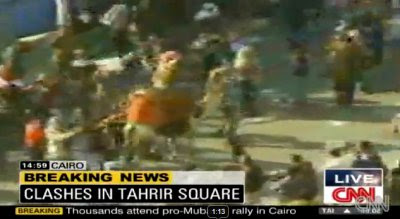 ...in January 2011, before even a dozen demonstrators were killed, a small herd of camel-riding Mubarakists rode into Tahrir Square trampling some protesters underfoot, and Obama immediately flew into an apoplectic rage, gliding close to personally claiming that Mubarak was a war criminal for attacking peaceful "democratic" demonstrators... 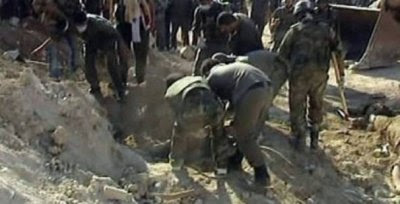 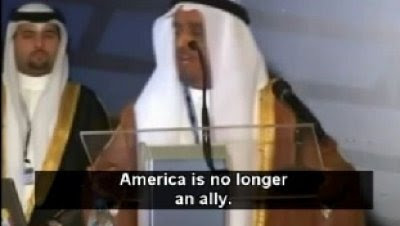 The reason: the US President Obama has artfully and silently pivoted US Middle East Policy from a Pro-Saudi, Anti-Iran paradigm to a Pro-Iran, Anti-Saudi imperative.

Crazy you say? The Dubai Police Chief Dahi Khalfan Tamim, attending at a recent Gulf security conference with US diplomats, “undiplomatically” for over 18 minutes calmly stated...:

1) “US Policy is the Number One threat” to the Gulf States;
2) America “has realized the dreams of Iran in Iraq;”
3) the US has “adopted the path and ideology of Khomeini;” and
4) the US “is no longer an ally” of the Gulf States. 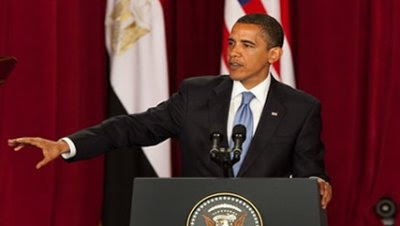 To frame the instant question with a sharper point: Why did President Obama, in his 2009 Cairo Speech, pro-actively incite and reflexively, over Saudi Arabia’s infinite anger, support the overthrow of President Hosni Mubarak, who was the US’ stalwart Sunni American ally for over 30 years and who acted as the sole-substantial Sunni Arab counterweight to Iran?

...How come the Nobel Prize-winning Obama unflinchingly allows Assad, a Shiite/Alawite, confirmed state-sponsor of terror, funneler of IEDs in Iraq which murdered thousands of US soldiers, and a stalwart ally of Shiite Iran, to cold-bloodedly massacre what is now over ten thousand unarmed Sunni Muslims? 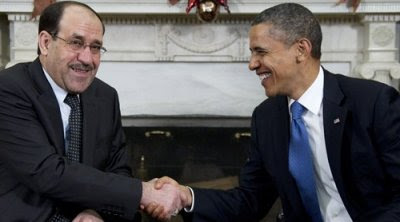 ...And why did President Obama anoint the Shiite Al Maliki, a known-Iranian stooge, as the omnipotent new-Shiite Saddam of Iraq, sideline the Iraqi Sunnis, and compound the decidedly pro-Shiite tilt by tacitly handing the keys of Iraq over to Iran...? 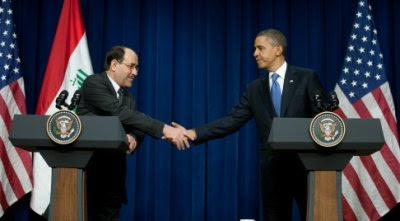 Why does Obama constantly refer to the ragtag, disjointed, barely-existing Sunni al Qaeda as the "greatest threat to the US" when the Shiite Iran and its Hizbullah and Iraqi based proxies have killed many times more US soldiers and US civilians in the past 20 years than al Qaeda has, - and Iran is nearing the acquisition of nuclear bomb and constantly claiming Israel is a "cancerous tumor" that needs to be "cut out" of the Middle East? 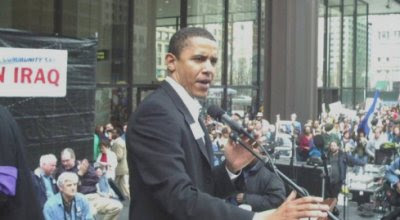 ...The answer can be found in Obama’ first documented foreign "policy" speech in 2002 dubbed the "Iraq War Speech" where Obama unambiguously declared:

“You want a fight, President Bush? Let’s fight to make sure our so-called allies in the Middle East, the Saudis and the Egyptians, stop oppressing their own people, and suppressing dissent, and tolerating corruption and inequality. . . .” - Barack Obama, Oct. 2, 2002

From Obama’s very first recorded words on US foreign policy, Saudi Arabia, and not Iran, was to Obama, America’s Number one enemy.

President Obama’s inimical abhorrence of the House of Saud was further codified in US President Obama’s May 19, 2011 major Foreign Policy speech where he repeatedly explicitly attacked Bahrain, Saudi’s key ally, as well as again clearly targeting the “elite” Saud Family when he stated:

Prosperity also requires tearing down walls that stand in the way of progress -– the corruption of elites who steal from their people; the red tape that stops an idea from becoming a business; the patronage that distributes wealth based on tribe or sect. –- New York Times, 5/19/11 “Obama’s Mideast Speech”

Obama, from his 2002 speech on a Chicago street to his 2011 speech at the State Department, sees the House of Saud as the very personification of Obama’s “elites who steal from their people,” and of “the patronage that distributes wealth based on tribe or sect.”

But Obama’s one act which symbolically crystallizes the essence of what has been, is, and will be the Obama Doctrine is Obama’s very first act as US President. ...he formally and publically returned the bust of Winston Churchill to Great Britain that had long adorned the Bush Oval Office.

Obama viscerally rejected Churchill’s White House presence because it was Winston Churchill and his “Lawrence of Arabia” generation of British foreign establishment that, in effect, had “divided and conquered” the Muslim Ummah, and empowered the balkanized Sunni “elite” kingdoms at the expense of the Shi’ites and the Ottoman Empire. While empowering the local Sunni Kingdoms, Churchill disempowered a possible unified Muslim Caliphate, and the Shi’ites.

...In accordance with this doctrine, Obama obliterated the Sunni Qaddafi with hundreds of million dollar Tomahawk missiles, deleting the precious cache of Tomahawks (for possible use against Iran) where there was a truly heavily armed Libyan opposition who could fight for themselves and instead left an absolute Islamist maelstrom wrapped in chaos enveloped in bedlam and mayhem. As a result, Obama has mutely watched well over ten thousand Syrian Sunnis be massacred by Iran’s Shi’ite handmaiden, Assad, and hasn’t even shipped in one 5 kilometer range anti-tank weapon that would easily spay Assad’s rampaging tanks and artillery. 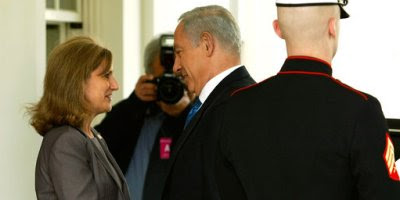 ...And as a final policy puzzle piece, Obama’s noisy objection to an Israeli attack on Iran is, in reality, a deafeningly silent total rejection of Saudi Arabia’s push for America to militarily attack Iran. The Saudis know Iran is infinitely more of a threat to Saudi Arabia than to Israel.

Obama has publically amped up the five-alarm fire-fight with Israel to make the Iran issue appear to be an “Israel only” issue, thereby preemptively embarrassing the Saudis out of even asking for the US to strike... So for Obama it’s a win-win-win, actively attack Israel, blame Israel for destabilizing the Middle East, attack Israel’s American supporters as dual loyalists, and passively pre-reject the Saudis request for an attack on Iran’s facilities before the Saudis even ask for one. 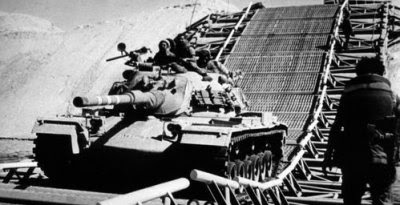 What all this means is Obama has quietly turned 50 years of US Foreign policy on its head without even a single congressional hearing... Obama’s true foreign policy objective seems to be nothing less than the full nuclear weaponization of Iran. Anything else is a smoke-screen for Obama to look like he’s doing something, but in reality he is doing nothing to stop Iran’s acquisition of nuclear weapons.

In conclusion, Obama is actively "democratically" toppling all U.S. Middle East allies, and soon a nuclear-armed Iran will control 70% of the World's Oil Reserves, charging $500 a barrel for oil.

...And in the short-term, Obama and the world will watch Assad commit a holocaust against the unarmed Syrian Sunnis, and, of course, Obama’s golf game will see some improvement.

For what it's worth.

at 10:38 AM
Email ThisBlogThis!Share to TwitterShare to FacebookShare to Pinterest
Labels: Democrats, extremism, Obama, War, World

Saudi arabia is the big prize. If we can somehow instigate a revolt in Saudi Arabia, we could pull a Libya, and freeze their accounts in Europe and the USA. This money could be used to arm and help the opposition, and bail out or ailing banks.

As for Obama's domestic policies, don't let this day-old gem on the Naked Capitalism blog slip by:

>>Wednesday, February 29, 2012
Brace Yourself for Election-Driven Enforcement Theater: Token Roughing Up of Crisis Bad Banksters, While Corzine Gets a Free Pass<<

The statute of limitations has passed on most of the banksters and Obama donor/crook Jon Corzine is still a free man. Whenever Obama talks about "fairness" and "fair share" (higher taxes), always remember that he's a white collar criminal's best friend.

Thank you for this post. I thought I was going crazy. The media is determined not to connect the dots, thus not making the public aware. I think one day soon, when the bezonga hits the fan, the media squawk might be too late. The real news will be a thing of the past.

The twelfth imam that muckmood armeddinnerjacket has wet dreams about ?

This is no theory. It's as plain as the nose on your face. He's been soft on Iran from the get go, but leapt at the chance to oust Mubarak and Gadaffi. He wanted to redistribute their wealth, just like he's trying to do here.

"[S]oon a nuclear-armed Iran will control 70% of the World's Oil Reserves charging $500 a barrel for oil."

DINESH HAS A BETTER ANGLE.

IT'S NOT PRO-SHIITE OR ANTI SAUDI.

IT'S ANTI-WEST UNDER THE RUBRIC OF ENDING COLONIALISM.

Shame on "US" for letting things get so far out of hand. WE the people have the POWER! We freely give them the rights to represent us.... "WE can take them away!"