How else would you interpret this story? Not only are we seeing the White House and State Department call more attention to the Mohammed-mocking "Innocence of Muslims" than any terrorist network ever could've hoped for, but the President's indefensible scapegoating of the film and filmmaker to draw attention and blame away from U.S. security failures apparently knows no bounds.

Next week, Obama will denounce the film in a speech before the United Nations General Assembly:

"As he has in recent days, the President will make it clear that we reject the views in this video, while also underscoring that violence is never acceptable[.]"

As Obama's appalling policy of disengaging in the Middle East comes to fruition in the form of the region exploding and al-Qaeda's targeted assassination of an American ambassador -- the media spen[t] two weeks savaging Mitt Romney and directing our sorrow, rage, and helplessness on [a filmmaker].

For weeks this administration, aided and abetted by The State Media, has shamelessly lied to us about what happened in Libya. Moreover, in order to cover up and distract for unforgivable security lapses, this hapless filmmaker has been targeted for all of the blame -- certainly more blame than the Administration's failure to secure a consulate on 9/11 (of all days), but even more blame than the actual murderers.

And now, even though we know the truth about what really happened in Libya, it won't stop. It will never stop. Because Obama knows his media will never make him pay a political price for lying and scapegoating...

And so, next week, as Obama condemns this film, and therefore the American ideal of freedom of speech, before the entire world -- all in an effort to quadruple-down on a brazen lie that's already been exposed as such -- it will truly be the ultimate Big Brother moment of this presidency.

Not only has the administration lied about and covered up its failures in Libya, but today The Hill reported something even more bizarre: 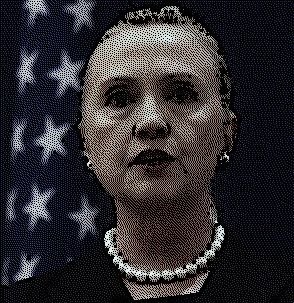 Senate Republicans are furious the Obama administration rebuffed their attempts to learn details of the Benghazi attack, only to give the coveted information to The New York Times and The Wall Street Journal.

Senators say they were rebuffed by Secretary of State Hillary Clinton when they pressed for more information about the attack that killed U.S. envoy Christopher Stephens in Libya.

“That is the most useless, worthless briefing I have attended in a long time,” Sen. Bob Corker (R-Tenn.) told reporters after the closed-door session.

GOP lawmakers were incensed to find many of the details they tried to learn Thursday were in a front-page article in The Times the following morning.

That's right: the "President of All the People" gives better intelligence briefings to The New York Times than to Republican Senators.

Circulate this far and wide. November is coming.

Man, Hillary is looking good these days. I like 'em rode hard and put away wet.

Obama's Ruse: America is The Problem

Mexico has gun violence because America has the 2nd Amendment.

Arabia has violence because America has the 1st Amendment.

See the Pattern? America's Bill of Rights cause world ills.

The Islamist/Communist/Brotherhood in the WH must GO. VOTE!!!

PS: The_Bad: I wouldn't do Shillery with someone elses dick!

And will he praise the "Piss Christ" (exhibit that has returned to NYC) because it didn't kill any ambassadors?

Conservative Mom: you're just sad hubby won't piss on you.

Barry is making America his ghetto because it is a empowers him and fills the void left by his molesting father Frank. Obama is one sick puppy and the people who carried his water must be tried for treason in January and sent to Super Max. Holder, Pelosi, Frank, Reid, Hitlery... make them all dig up Teddy's bones to make soup and let the stones be their bread.

good luck with that. India's population is about 10%.